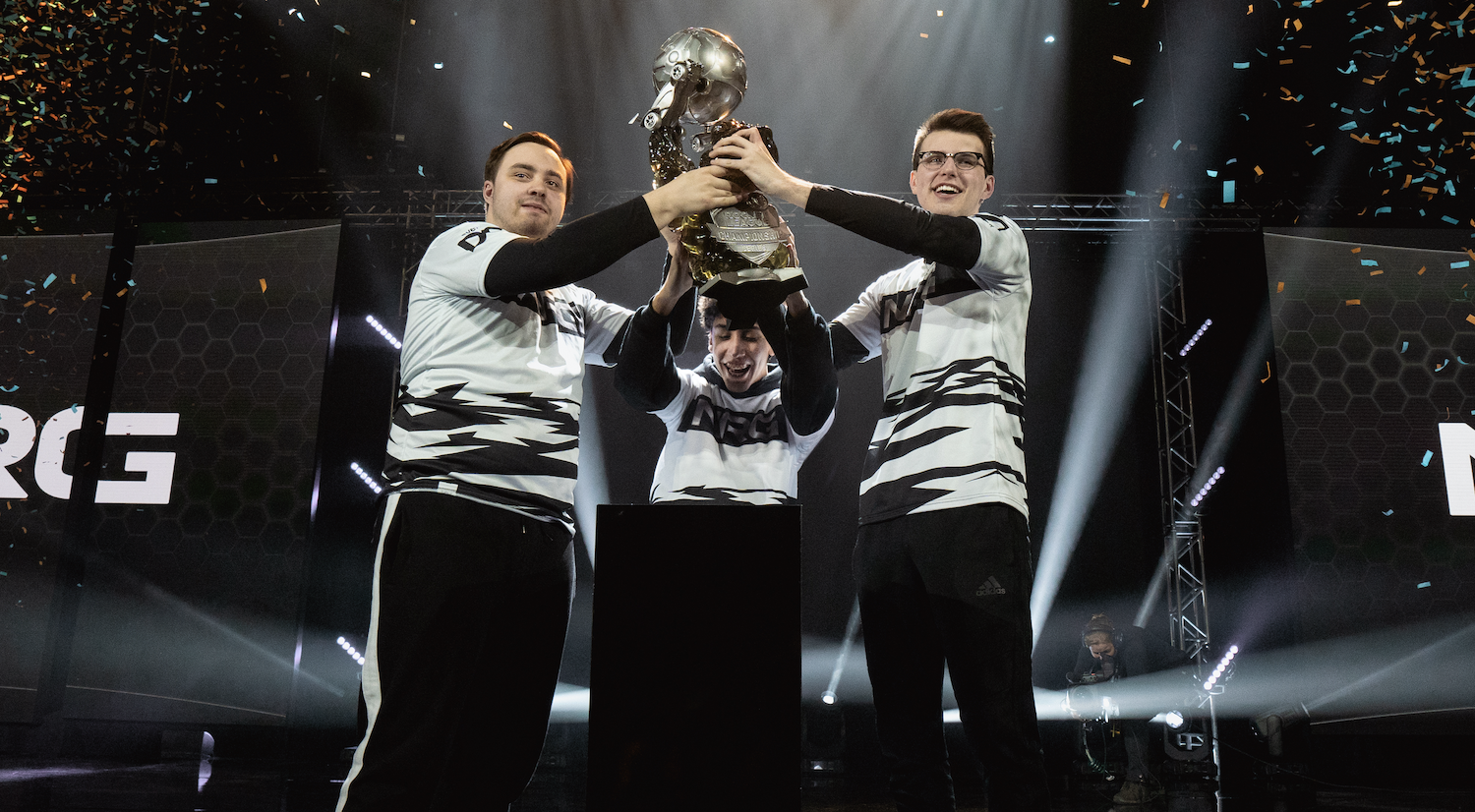 If Pierre “Turbopolsa” Silfver is still upset about being kicked from NRG Esports in June, mere months after he helped the NA team win its first Rocket League Championship Series title, he’s hiding it well. Rocketeers caught up with Turbopolsa this week after his new Team Envy squad beat NRG during the initial weekend of the first RLCS X North American regional.

“It’s not really satisfying to be honest. I want to beat everyone,” he replied, when asked if it was especially rewarding to take down his old team. “I don’t really feel like there’s any rivalry going on, even though they kicked me. It’s another normal win, I guess.”

Team Envy has racked up quite a few of those “normal” series wins over the last couple of months. With the only four-time RLCS champion alongside Nick “mist” Costello and Massimo “Atomic” Franceschi, they won June’s The Brawl 10K with Turbo in as a stand-in before he was officially announced as a member of Envy. They also finished 2nd in the first week of The Grid in NA, and went 3-0 last weekend in the regional—including taking down NRG.

It’s been a strange couple of months for Turbopolsa, the EU legend who is now with his second NA team, not to mention living in a totally new city after leaving NRG. But if the early signs are any indication, he hasn’t lost his motivation to play at an elite level and he sees potential in his young teammates to help guide Envy towards an RLCS title.

It was last December at the Season 8 RLCS World Championship that Turbopolsa claimed his fourth title and first in NA, not to mention the first for his teammates Garrett “GarrettG” Gordon and Justin “jstn” Morales.

Expectations were naturally high for NRG going into Season 9 this past spring, but the team didn’t have quite the same spark, finishing 6-3 in the regular season and 3rd-4th at the season-ending regional championship (the World Championship was canceled due to COVID-19). NRG also got roughed up in the grand finals of the Rocket League Spring Series that followed, losing 4-0 to G2 Esports, and didn’t place well in tournaments that followed.

The June 10 announcement that NRG had signed Cloud9 superstar Mariano “SquishyMuffinz” Arruda surprised the entire Rocket League community… and as we quickly found out on Twitter, it surprised Turbopolsa too. He had been replaced without any discussion in advance, nor what he says was any indication that a change was coming.

“I think it was just bad results over and over again. I don’t really know,” he said. “It was obviously a surprise to me, since we had scrim schedules and everything ready, so I didn’t expect anything to happen. I think it was just a mix of bad results, and then they didn’t think that I was motivated enough, I guess. But it worked out for them, so I can’t really blame them for anything.”

He’s right: it has worked out for NRG in the short term. While the loss against Envy might’ve been disappointing, they ultimately made it through to this weekend’s Top 16. More broadly, they’ve been the most dominant team in North America since the change was made. Still, it was a harsh blow to Turbopolsa, who not only lost his starting spot six months after winning another title, but also was accused of lacking the will to play at a high level.

“I don’t think there was a lack of motivation,” he said. “Obviously, I could’ve put more time into the game. Right now, I have 70 hours the past two weeks, and before I had 30-40 at max. I don’t blame them at all for thinking I don’t have motivation, but I guess they could’ve talked to me about it beforehand. I could’ve taken it more seriously. So, some of the blame is on me.”

Beyond the shock of losing his team, there was an even larger question mark in front of him: would Turbopolsa be able to stay in the United States? The Swedish player’s visa had been sponsored by NRG to get him over to North America. Would he be able to find another team to sponsor him to stay in the States, or would he be forced to go back and play in Europe? Did he even want to go back to Europe? The rumors and speculation swirled.

“Obviously, I was stressed in the beginning. I didn’t know what to do and I didn’t want to go back to EU to play there, since I think there’s more opportunities in NA and there’s better competition in NA, in my opinion,” Turbopolsa told Rocketeers. “NRG did help out with the visa stuff, I have to give them that, but obviously I had to get a team and an org that could sponsor me with a visa. I had a few choices of teams to join, but I’m really happy that Envy took me. It’s been a good time so far.”

Since the signing, he’s moved from his previous apartment in Atlanta (once shared with GarrettG) and now is living solo near Envy’s headquarters in Dallas. Picking Envy pairs him with mist, who also competed at the Season 8 RLCS World Championship with the Pittsburgh Knights, and Atomic, who doesn’t yet have significant LAN experience.

“I know Atomic and mist have really good potential to be top players, and they haven’t been a top team,” said Turbo of picking Envy. “And then obviously, Envy the org is super well known and they were really interested in me. When the team contacted me, I kind of knew that this team was the one I was going with, because of the potential they had. Hopefully I can help them reach their potential and lift a trophy.”

Turbopolsa, who has been competing in the RLCS since the very start, has a few years on his teammates and quite a bit more overall competitive and especially LAN experience. Still, he doesn’t necessarily see himself as a mentor on this team, nor does he feel like he has to fill that role. He believes that mist and Atomic already know what they need to do to be successful.

“I try to be as calm as possible for them to not stress out. Obviously, I’ll be stressed out in close games, as well, but I just try to let them know that we’ll be fine if we stay calm,” he said. “I don’t really think there’s much I can do, because they’re really smart players. They know themselves what they have to do, so I don’t have to babysit them or anything like that. I just have to show up. That’s about it.”

Team Envy already showed up big in the first weekend of the North American RLCS X regional, but the key to success in this new format is consistency. There are more teams in the mix, some of which wouldn’t have been competing at the top level in the prior RLCS league play format. However, that just means that the old RLCS-level squads have to be on their game constantly or risk a potential upset against lesser-known squads.

As for Turbo, he’s into it: “It’s just way more pressure, and I like having pressure on me when I’m playing,” he said. Given their performance last weekend, he’s understandably feeling good going into Top 16.

“I think we’re playing very good right now. There’s always room for improvement, but as of right now we’re playing very well,” he said. “I’m quite confident that we’re going to at least reach Top 4. I hope we win, but I see us making Top 4 at least, and then after that we’ll take game after game.”

No player has won more RLCS championships than Turbopolsa, and even after a messy split with NRG, he’s still racking up wins. He’s long been known as an excellent all-around player with finely-tuned game sense, and while he’s the first to admit that some of the game’s younger guns (including his new teammates) have sharper mechanics in their toolsets, you can’t argue with results when it comes to the four-time champ.

Can he make it five this season? It’s a much longer road ahead than usual, given the new RLCS X format, but he’s up for the challenge and has faith in his teammates to help make it happen.

“I am less mechanically gifted, but both of them have mechanics, they know what to do and they’re fast. They can play fast whenever they want, they can play slow whenever they want. Their adaptation—they’re very smart about it, as well, and they can adapt to other teams quite quickly in a series. If they want to change something, they’ll say it. For their young age, they’re very mature in-game, to say the least. I think that’s one way we can go further than other teams.”