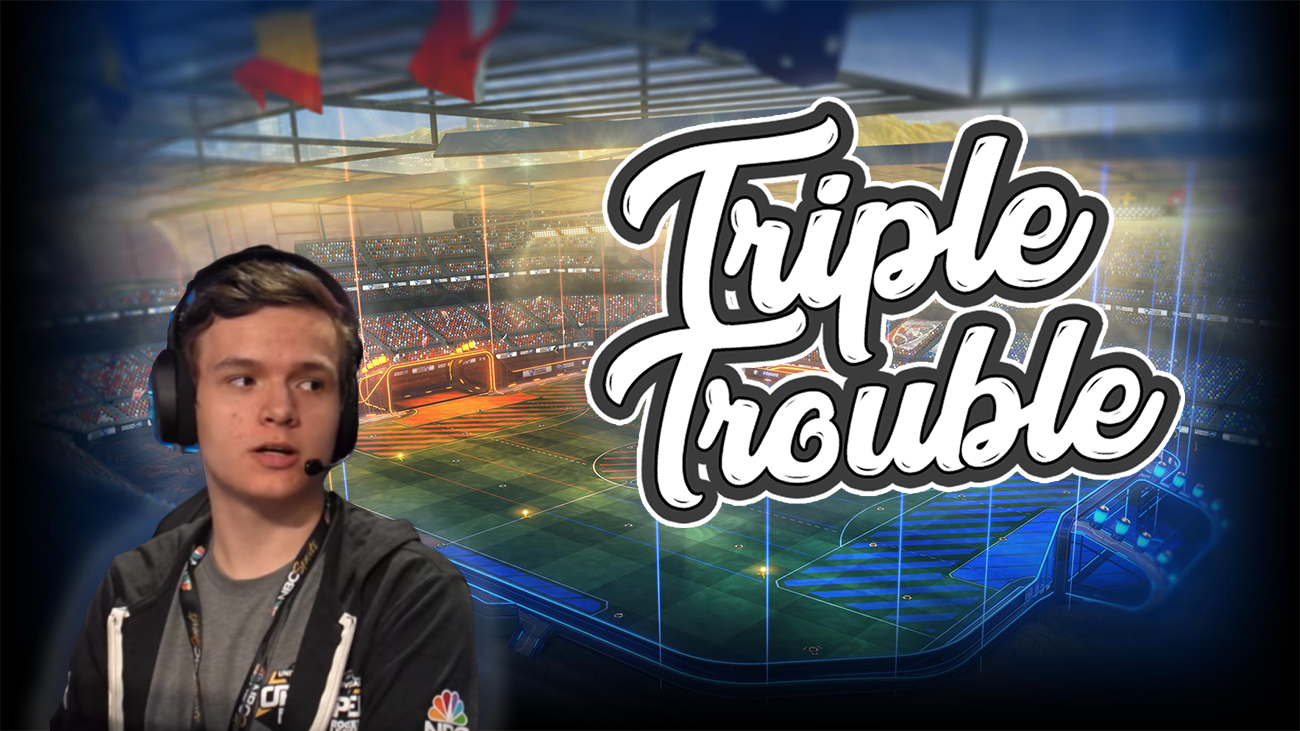 The year started rough for Triple Trouble and their team captain Aldin “Ronaky” Hodzic. First their org Red Reserve released them, then their player Speed got signed by Flipsid3 Tactics (now The Bricks).

When the season kicked off, nobody would’ve believed that Triple Trouble, the team that managed to fight their way into RLCS, would be able to beat a couple of the best teams in the world. But they did. Last weekend saw Triple Trouble defeating first Dignitas and then even Vitality, possibly the best team in the world right now.

We reached out to Ronaky to speak about his team’s latest success and how it felt to defeat his former teammate Speed. Here’s the full interview.

“This truly has been an amazing season so far”

Ronaky, congratulations on the success you guys are having in the RLCS. Would you’ve guessed at the start of the season that you might actually have a shot at a top 2 spot?

Thank you very much, this has truly been an amazing season so far. Honestly we just wanted to get top 6 so we could secure our spot for next season and have a go in playoffs. But having the chance to make top 2 was never in my mind.

Before the season started, you actually had a tough time. Speed left to join F3, and there was actually a moment where it looked like you might lose your RLCS spot due to the slight chance of Tadpole leaving too. How did you handle that situation? I can only imagine this being a total nightmare for you.

Triple Trouble had a very good ending of 2018 but a very bad start of 2019. The whole team looked like it would crumble, and that we all split up. I honestly just kept up the hopes that something good would happen, and that no matter what I was proud of what we achieved together. It was a nightmare getting the news, that a teammate is trying out with another team. I can’t do anything but respect the decision if they felt like it was the right thing to do.

If this turns out to go the way it looks, I have never been fucked over harder in my life.

“It was hard to find the chemistry”

Your new third is former Method player Kassio. Tell me a bit about how you got in contact with him and why you decided that he might be the right fit for your team?

Andy “Kassio” Landais was one of my first teammates in the competitive team. And we created Triple Trouble together with Antton “Andom” Anttila back in November of 2017, if I remember correctly. When Speed first told us about everything, Tadpole and I had to think about the future of the team if Speed chose to leave. We both had Kassio in our mind, because he can easily play the “Speed” role in our team, and could fit into the team very fast. In all honesty, it was hard to find the chemistry with each other, but we are slowly working on it and it is definitely getting better.

Happy about my own and the performance of my two team mates @RonakyRL and @TadpoleRL, we’ve been through a lot of issues all over the season and the work has paid off.

“Speed and I are cool”

You faced your former teammate Speed already in week 1, and Triple Trouble emerged victorious. How was that victory for you and how are things between the two of you now that a couple of weeks have passed?

Getting that win would have been very important for both teams obviously, but I feel like it was much more rewarding for me and Tadpole. To just show that we don’t need Speed to show that we are a top EU team. Speed and I are cool, and we don’t have anything against each other. We both know we are playing the same game, and sometimes you have to face old teammates and friends.

One of the biggest surprises are the results of Dignitas. Last week you managed to defeat them 3-2. Tell me about your thoughts going into the match and how you managed to actually defeat a World Championship winning team?

The win against Dignitas was huge for us, it secured us at least top 5 if I am correct, and beating two players that have won RLCS 5 times combined is a crazy achievement for me. It was such a big relief that we finally showed what we can do as a team and as individual players.

“None of us were nervous coming up against Vitality”

In addition to the Dignitas victory you also managed to defeat the so far unbeaten Vitality on the same day, ruining their perfect season. Was there something special in your breakfast that day or how the hell did you guys manage to pull off such an amazing day of league play?

To be honest, none of us were nervous coming up against Vitality. They had shown and looked like the best team in the world currently, and everyone thought they would 3-0 us anyway. So we had nothing to lose going into this series, but only to gain if we just played our own game confidently. And that was what we did. We just controlled the game and didn’t let Scrub Killa do anything ridiculous.

Ggs to @TripleTroubleRL they played really good gonna take that series as a learning experience and come back stronger next week! ??

From your perspective, what gave you the edge over Dignitas and Vitality?

I think we had the edge over Dignitas and Vitality because we didn’t have as much pressure on us as they had. People saw us as a low tier RLCS team so we didn’t have to worry about disappointing anyone. All we were focused on was to impress the viewers, and show what we are capable of.

“They are insanely talented”

Your upcoming and final match of the regular season will be against FC Barcelona, a team that’s a fierce rival for that top 2 spot. How are you preparing for the match against Bluey, Deevo and Alpha54?

We have always had a rivalry with FCB or previously Savage. We fought against each other in RLRS and in the promotion tournament. They are all 3 really great guys and insanely talented. This will be like the Vitality series, where no one believes that we will win. So all we have to do, is try to prove them wrong.

Your team is a contender for the top spots of the EU RLCS, but currently you’re still unsigned. Are you actively looking for an org and are there offers?

We have always been in contact with organisations, but we will only choose one that we feel matches us. And an organisation we can build and grow with. So yes, we are actively looking.

Who will win the upcoming match? FC Barcelona or Triple Trouble? Join the Rocket League Discord server to discuss RLCS with the community.

G2’s Chicago about the most important match of the season

Recap of one of the craziest weeks yet