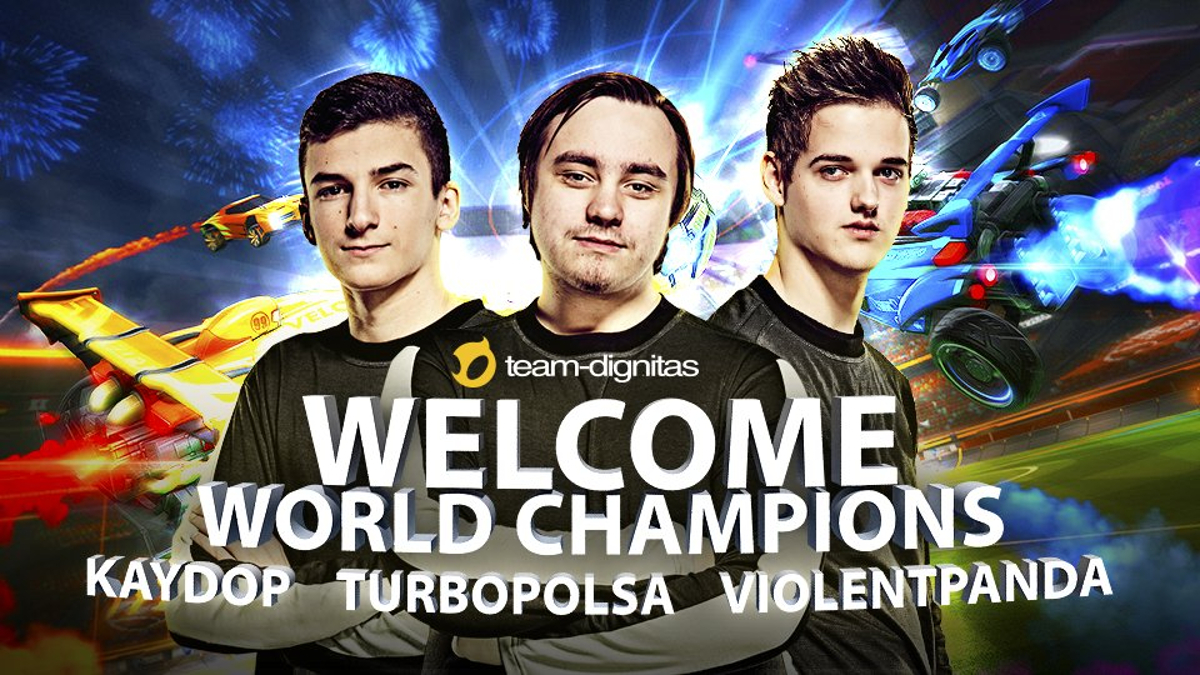 The biggest upset of this week is without a doubt the acquisition of the former Gale Force eSports roster through Team Dignitas. In case you have missed it: Earlier this week, Team Dignitas announced that they’d hired the three star players and current World Champions Kaydop, Turbopolsa and ViolentPanda, who were up to this point under contract with Gale Force eSports.

It’s a big day at Team Dignitas! We’re excited to introduce you to our new CEO, @mikeprindi.

While I’m happy for the three players and would never put blame on them, this sudden acquisition is a bad look for Rocket League as an esports game – and here’s why: From an outsider’s perspective it’s simply weird that a team you’ve possibly cheered for all season switches orgs before the season has even concluded. All of a sudden you’re not cheering for Gale Force (who are out of their spot at the World Championship), but rooting for Dignitas instead, who up to this point had no possibility of even playing at the World Championship, let alone be a favorite going into the tournament.

Patience is key 😀 ,
So happy to be apart of @TeamDignitas https://t.co/reNAQmMzrG

Let’s compare this with traditional sports: Football (or soccer, depending on where you are from). The Champions League finals are about to happen. Real Madrid will play against Liverpool. Imagine one of the clubs that didn’t make it to the finals, say RB Leipzig, just swooping in, buying the complete Real Madrid roster and hence being qualified for the most prestigious football match of the year. This would be insane.

Of course I’m aware that football and Rocket League are completely different dimensions. But still, it’s not a good look for any professional esports if someone can simply put enough money on the table, recruit all players from another organisation during an ongoing season and by doing so they simultaneously qualify for the most prestigious tournament of the season. Roster changes happen way too often in Rocket League as it is, and it’s hindering investors and brands to get involved (I explained this at length in this article). But this acquisition adds a completely new layer of insecurity from an investor’s perspective.

Gale Force on the brink of ruin?

To be fair, I want to provide a little background, that might explain a bit how this acquisition was even made possible: It was kinda known for a while that the Gale Force eSports organisation was in trouble to some degree. Gale Force gave up their spot in Blizzard’s Heroes of the Storm league HGC, there were rumours floating around that they haven’t been paying their players, even their website hasn’t been updated in quite some time. To sum it up: it became obvious that an organisation that’s on the brink of ruin wouldn’t be able to hold a World Championship winning team. Or maybe wouldn’t even exist at the time the World Championship is being held. What is a team supposed to do, if their org falls apart before the end of the season? Of course you try to land another org. I get it. Still, it looks at least unfortunate from the outside.

Many fans were already guessing which org might swoop in to sign this incredibly talented team. But no one would have ever expected that it would be Team Dignitas. The reason being: They already had a Rocket League team, which makes it even weirder. Their RLRS team, which consisted of Turtle, Zol and Chicago, played a decent season and finished on 4th place. Not good enough to make it into next season’s RLCS, but good enough to secure their RLRS spot. With this acquisition, the three (now former) Dignitas players were released, and Dignitas go on to compete in the World Championship with a completely new roster. Doesn’t this sound weird to you, too?

I’m really excited to play under @TeamDignitas it’s going to be a great time and can’t wait to win some trophies with their support ?

Life likes to kick you when you’re down

But actually, they are gonna be in great hands with Dignitas and I’m super excited form them, but @Turbopolsa u might not wanna drink all the free Mtn dew ?

No one is to blame

The point is: I don’t blame anyone. I’m actually happy for ViolentPanda, Kaydop and Turbopolsa, because they’re now playing for one of the most established organisations in esports, and if GFE were falling apart, it’s only understandable that the players find the best option for them. I can also understand Dignitas’ perspective. You want the best for your organisation, and if the opportunity presents itself to recruit the current World Champions, you most definitely go ahead and do that. I just think that it’s not a very professional look for Rocket League esports in general. It’s a symptom of missing structures, unpaid players, loosely defined contracts – we’re still witnessing the dawn of professional esports. But as we all want esports to be taken seriously, we must make sure that such disruptive roster changes are not allowed any longer. This would never happen in League of Legends, it would never happen in CS:GO, and it shouldn’t be happening in Rocket League.

You disagree completely? You want to offer your perspective on the matter? Feel free to join our Discord server and engage with others who love Rocket League as much as you do!