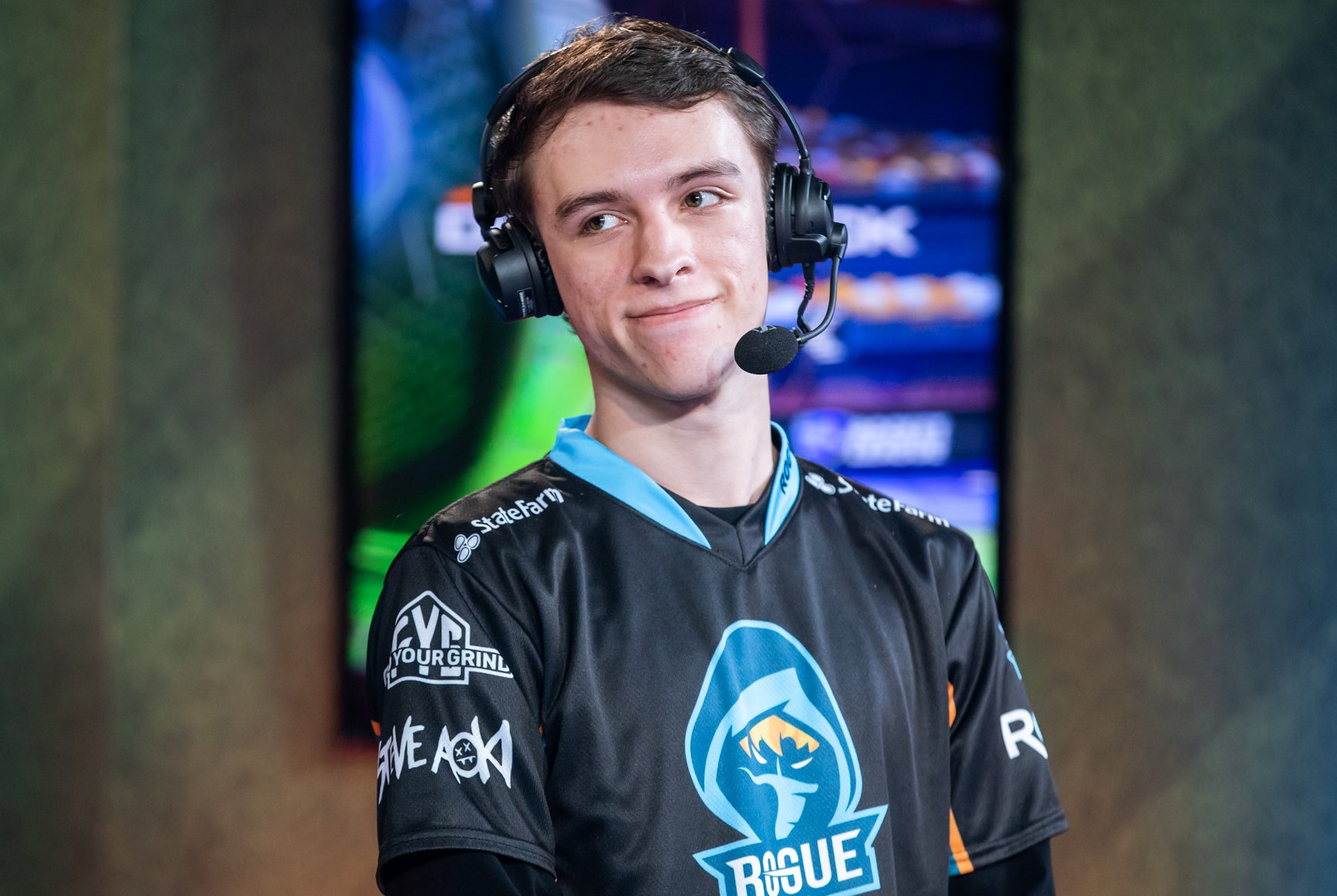 Entering his ninth Rocket League Championship Series (RLCS) season, first-season champion Cameron “Kronovi” Bills has experienced the highest highs and some of the lowest lows of professional Rocket League over the course of his career. Last year proved to be another mix of those moments.

Joining Rogue at the start of 2019 after being dropped from his longtime home of G2 Esports, the roster of Kronovi, Austin “AyyJayy” Aebi, and Nicholas “Wonder” Blackerby never quite found consistent form in Season 7—but they turned an unexpected World Championship trip into a shocking Top 4 finish. However, inconsistent play continued in RLCS Season 8—and this time around, it didn’t result in a trip to Worlds. After a year of ups and downs together, AyyJayy departed to join the Pittsburgh Knights.

Who exactly would take his spot was uncertain, and the resulting announcement proved surprising: Jason “Firstkiller” Corral, who first signed with Ghost, had been traded to Rogue barely a week later. The 15-year-old rookie arrives with a lot of hype given his mechanical prowess, especially in 1v1 play, but he’s a yet-unproven force in top-level, RLCS-caliber 3v3 competition.

Will a hot rookie be the spark that Rogue needs to challenge the North American elite and return to the World Championship? Ahead of RLCS Season 9, we spoke with Kronovi about the offseason moves, serving as a mentor to his young new teammate, and why Rogue’s scrim results so far have been “absolutely insane.”

Rocketeers: How do you feel going into Season 9 next weekend?

Kronovi: With the addition of Firstkiller to the team, we’re actually feeling really good. Despite some of the confusion we might’ve had during the offseason on who we were going to pick up, I think he was probably one of the better things that could’ve happened to the team.

Can you talk a little bit about your first year on Rogue? It seemed like things were up and down, but you did mange to make a great run at Worlds in Season 7.

My very first season with Rogue was… for me, I wanted and needed it to be a bounce-back season, because I was just replaced on G2. I wanted to prove not only to myself, but to other people, that I deserved to play at the World Championship regardless of what team I was on—as an individual. The rough start was because it was a new team, but there was a lot of willpower there to go to Worlds and do well there.

After last season and missing out on Worlds, what were you expecting to happen in the offseason?

After missing Worlds, I talked with AyyJayy and Wonder and no one was really happy that we missed Worlds. I’m not really used to missing Worlds—I’ve only missed a couple, so we all came to an agreement that a change needed to happen. We put a lot of work in. I respect the work ethic of everybody who was on Rogue, and despite all the work, we weren’t getting results. Results are the number-one thing that I care about, so we changed something.

Were you upset to see AyyJayy go, or did you feel like it was the right move to make?

I think the move worked out really well for AyyJayy. I think he’s happy where he is now, a lot happier than he might have been with us. I think he gels well, personality-wise, more with Retals and Gyro. I’m happy for him and I want to see him succeed. Everything between all of the roster moves was very amicable, so he just took an opportunity and I’m happy for him.

What, did you think we were going to Ghost you?

How exactly did Firstkiller end up on Rogue after signing with Ghost?

Yeah, so this offseason, I think we ended up landing Firstkiller mainly just due to some really strange shenanigans from Ghost. They really couldn’t make up their mind on who they wanted, and it came down to the last eight hours of roster lock where they did a double-take and decided that they wanted Mist. So yeah, it was confusing.

What do you think makes Firstkiller an RLCS-caliber player, and how can he help Rogue reach new heights?

Firstkiller is one of those players who is just so incredibly consistent and fast that he is really an asset to any team. Not many players get signed into the RLCS the moment they turned 15—I think it’s only happened a few times. Based on how practice is going, he deserves it. Already, our scrim results have been absolutely insane, in my opinion. I couldn’t really be happier, and I just want to go out there and smash everybody.

Do you see yourself taking something of a mentor role with him as he gets used to being a professional?

Absolutely, I think me and Wonder want to fill that role for him. Firstkiller has kind of hung out with some people in the past that I think weren’t the best influence on him, and he’s gotten away from those people now. Me and Wonder want to be there to mold him, mainly for his personality outside the game and PR and stuff like that. We really want to teach him to be a star on the pitch and also have everybody like him, and to be a likeable personality. He’s really receptive to us, and we really want to be mentors for him and really turn him into a star.

What in the world was this aerial @Firstkiller19?!

You’re one of only a handful of Season 1 players still around in the RLCS. What do you attribute your longevity to?

I think, probably one of the only reasons I’m still around is just because I haven’t really lost my passion for this game, and my passion for competition. Despite any hardship that gets put in front of me, I only care about playing Rocket League, beating everybody in the RLCS, and going to the World Championship and trying to win that. I think the fact that I’ve never lost focus on that has helped me continue to practice and continue to perform when it matters.

What kind of impact do you think having 10 teams and a longer schedule will have on league play this season?

I’m very excited to see how the 10-team league play goes. It’s definitely a little more lenient now, since you have more matches to play and you have more chances to prove yourself. It just makes it a little harder on the very top and the very bottom end. Now with the auto-demotion, you really are trying to avoid 10th place. And with two extra teams to play, that battle for Top 2 is going to get even closer.

What do you think will make Rogue a contender for another World Championship trip this season?

I think the addition of Firstkiller is what makes us a contender for the World Championship next season. He’s brought a whole new dynamic to the team, and I think me and Wonder are doing stuff that we never thought we’d be doing, but I’m really, really liking the way practice is going. It’s honestly giving me a lot of confidence.

Have you and Wonder had to change your play style at all to accommodate Firstkiller?

I don’t think I’ve actually had to change my style all too much. I think the play style change that’s happened the most has actually been with Wonder. I think he’s actually become more enabled. I think Firstkiller’s pace is actually something that is refreshing for me and Wonder. We’re capable of playing a mile a minute, and that’s definitely what First wants to do all the time. As we’re getting used to it, we’re getting more and more comfortable doing that.