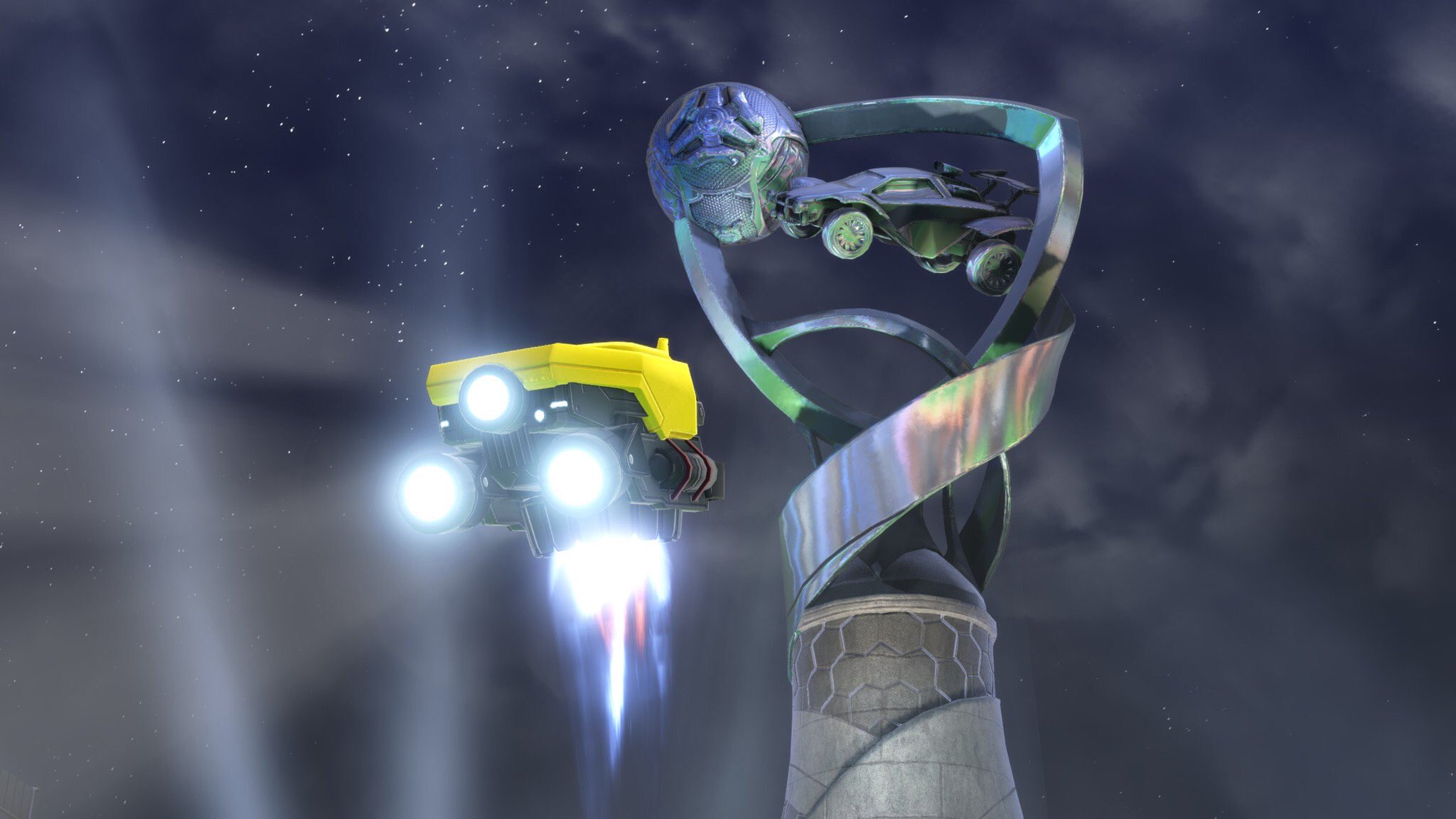 Have you noticed improvements in the way that Rocket League Championship Series (RLCS) action is displayed over the last couple of seasons? Many people in and around the competitive scene have pointed out the increase in killer camera angles for jaw-dropping shots and a more informed visual experience to match the always-stellar casting, and there’s a reason for that.

His name is Jake “strangest_stranger” Friedman, and he has been the observer for the RLCS since the Season 7 World Championship in Newark. Described as the “unsung heroes of esports broadcasting” by theScore, observers are the people who control the in-game camera perspectives to attempt to deliver the best-possible experience for viewers.

This process can vary significantly across esports games, whether it’s keeping tabs on players across a wide map in a MOBA like League of Legends or Dota 2, or needing potentially dozens of observers to follow players or squads in a battle royale shooter like PUBG or Fortnite. There’s no esport quite like Rocket League, however—and while the esport prides itself on being easy to understand at a glance, quality observing can only help with that goal.

If there’s been an RLCS goal with better camerawork I’m yet to see it. Absolutely gorgeous #RLCS8 pic.twitter.com/K7X6l5HTiv

In the past, RLCS broadcasts often relied on the automated director cam, which had been famously hit-or-miss—and desk host and former caster Brody “Liefx” Moore shared on Reddit last year that casters who weren’t currently working a game would rotate into the observer role during broadcasts.

Friedman, who has been part of community tournament organization Rival Esports for some time, began observing at last year’s DreamHack Dallas event—and the strong feedback from viewers and Psyonix alike jumpstarted his career as the go-to observer. “I kind of got thrown into the RLCS Season 7 LAN, and from there I just kept working almost every LAN event besides [DreamHack] Valencia, I think,” he told Rocketeers in late February.

Typically when observing, Friedman sits in front of a bank of computers—one of which has the familiar behind-the-car player cam, and another with a wide-angle flycam. If you’ve ever seen something like “RLCS Observer” listed as a player during the stream, that’s him… usually multiple times over. “When you’re watching a broadcast and you see a list of names in a replay or something, I’m like three of those,” he says.

His job is to constantly monitor the perspectives during a match and swap as needed to find the best view. He’ll occasionally use director cam if it’s showing what ought to be seen, but he provides the human perspective and can immediately get hands-on if needed. As a fan of the game with strong knowledge of the perspectives available to him and the tendencies of many of the players and teams in the mix, he’s able to apply all of that in each frenzied match.

“It’s one of those things that I’ve been trying to work on how to verbalize, because it’s not easy. It’s really a balance between finding an informative shot and an entertaining shot,” says Friedman about his philosophy. “If you were to watch the player who’s always making a shot on the ball—from their perspective—for five minutes, I think it would almost be nauseating to watch.”

A beautiful angle of this crazy shot. Our observer @bystrangedesign is putting in work 💪 pic.twitter.com/U93QC7Pxsz

“However, because the game is very fluid, I do try to find a perspective that stays informative but might provide additional information on the shot,” he continues. “If both teams are really giving up possession, it’s probably not particularly interesting or important to watch a player clear the ball down the pitch. Knowing that, I can cut to that flycam and you can get some really cool shots of teams rotating on their own halves, giving up possession, and trying get boost.”

There have been many community observers in competitive Rocket League, and the casters are obviously very familiar with the tools and goals of the job. However, by having Friedman in a dedicated role—not only for the RLCS, but also other recent events like DreamHack and Beyond the Summit—he can focus on developing the position, establishing best practices, and working with the wider production team to deliver a better overall broadcast.

“You can really build a story with those perspectives in the game,” he says. “I think before, you had your casting talent building up the storyline, and they’d just have director cam or someone else who is not fully dedicated to that position to observe. It would be kind of disjointed—what you see doesn’t necessarily match with what the talent are talking about. Hopefully that’s becoming more and more cohesive and changing how the broadcast looks and really feels as a whole product.”

And while he doesn’t attempt to exactly mimic the casters’ play-by-play commentary, again noting the potential for nauseating results from the rapid possession changes, he does aim to supplement their comments when possible. “I try to use the talent as much as possible,” Friedman adds. “If they want to talk about Flakes’ new car, I’m gonna try to jump to Flakes’ perspective so you can see whatever… Ghostbusters, what have you.”

Asked if he believes if there’s such a thing as a personal style to observing—something that viewers could come to expect, or even identify an observer by—Friedman says he isn’t sure. It might just be too early to tell for Rocket League observing.

“We’re only coming up on a year that I’m doing this,” he says. “I think there’s maybe been three or four people who have consistently worked events in this way. I don’t know if styles have really become formed in such a short time, but when I review my own footage from RLCS, I don’t know if I quite see a style yet. Maybe it will become a bit more apparent as time goes on.”

Friedman had done admin work for Rocket League tournaments before shifting more of his focus to observing, but had never observed another competitive game before that. Although it’s a much different type of game, he points to Counter-Strike: Global Offensive (CS:GO) as a source of inspiration—and one that he sees parallels with.

“I’ve taken a lot of cues from Counter-Strike, which I think is one of the best spectator esports around. It’s the one that I enjoy watching the most,” he says. “In a game like that, it’s very clear when there’s defined roles: who uses what weapons and what positions on a map they might play. You can really get deep knowledge and build a better broadcast from the observer’s perspective. Rocket League, I think, has similar qualities to that—but because teams are most effective when they’re rotational and each taking a piece in certain parts of the field, that doesn’t always come across.”

“Just knowing certain players’ tendencies can definitely be helpful,” he continues. “One example that I always go to is: I know Karma is one of the players who, when she puts on a shot, will always follow up by trying to hit defenders. Pittsburgh Knights are very much in that same camp in terms of style. That’s something that I can come to expect, and for the most part, it usually works out.”

It’s not difficult to find players and fans alike in the competitive community who think that Rocket League could use additional broadcast tools for viewers. Friedman agrees with the mentality that there is still room to grow, should Psyonix wish to build out the spectator capabilities further.

“For Rival Esports, I always enjoy producing new graphics that change up how the Rocket League broadcast looks. But for the RLCS, tools that could really help inform the viewer might be focused around additional boost meters for all of the players,” he says. “I think simplifying… I wouldn’t even quite say simplifying the UI, but I think the scorecard itself is something that isn’t quite necessary. Or it could be changed to have more information about the whole team versus just one player.”

As for the oft-pondered idea of a minimap on the broadcast that shows the locations of players, which could theoretically offer more insight into how positioning and rotations play into team success, Friedman suggests that it might not be as simple of an addition as it might seem.

“I think that would probably be too cluttering. Because of the verticality of the game, a minimap may not give you as much information as you need,” he says. “That’s something we’ve messed around with for fun [at Rival Esports], but it’s never quite gotten us the results we want.”

Prior to last weekend, Friedman had flown from New York to Los Angeles weekly to observe RLCS league play matches in-studio. However, shortly after our original interview was completed, Psyonix announced that the casters and analysts would no longer work out of the studio due to fears over the spread of coronavirus (COVID-19), as well as the exposure that comes with so much travel. Psyonix also canceled the RLCS Season 9 World Championship, and has opted to add $250,000 to the Regional Championship prize pools rather than make up the Worlds matches in some other way.

Unfortunately, that means that Friedman is no longer observing RLCS matches due to this temporary remote approach. He says that the quality of remote observing couldn’t live up to their standards, and that remote desktop clients aren’t typically reliable enough for the kind of fast-paced action that Rocket League delivers.

That said, he is still administrating for RLCS matches in the meantime, and is working with the current local observer to pass along his knowledge and coordinate the broadcast. Like much of the esports and entertainment world, the RLCS is adapting to unfamiliar and unexpected circumstances.

Prior to that announcement, Friedman told Rocketeers that the relative quiet and calm of the studio setting had struck quite a contrast to the World Championship settings of Newark and Madrid—but we’ve seen the benefits of his work regardless of environment.

“I think it is sort of humorous that my first interaction with the RLCS was in Newark. It was like throwing me into the fire, or whatever that phrase is,” he says. “Now that I have the studio experience with the RLCS, the LAN environment definitely feels… I don’t know if intimidating is the right word, but there were times in Newark and Madrid where the crowd is totally audible and you can practically feel it in our control room.”

“It’s definitely an awakening, if that’s the right word,” he adds. “In the studio, I’m not focused on how many Twitch viewers we have, or any of the kind of bigger-picture things. I’m just focused on the game. You can’t totally be isolated when you’re in that live environment. There’s just too many people.”