Is Bluey about to leave PSG eSports?

PSG eSports’ RLCS Season was a tough one. There’s no other way to put it. They came in with great expectations: After their tremendous success in RLCS S4 they went on to win Dreamhack Leipzig. Naturally they were considered to be one of the favorites in the EU region for RLCS S5 and a team that would most likely make it to LAN. However, PSG have struggled all season long. Their performance seemed inconsistent, torn between genius and instability. After five weeks of league play they finished with a 3-4 record on 6th place, barely making it to the Regional Championships where they were defeated by Team Vitality, which meant that they’ll miss out on the Season 5 World Championship (whenever, wherever).

That alone wouldn’t be too noteworthy. Bad seasons happen – even to Rocket League gods such as Ferra, Bluey and Chausette. But now it seems like there is some trouble within PSG’s roster and there are some hints that Dan “Bluey” Bluett, the British Rocket League wunderkind, might be unhappy and even consider to leave PSG eSports. First a screenshot was posted to Reddit in which Bluey appears to mention in Twitch chat that he’s not too sure about where he’s going to play next season. He also complains about the current situation and that the bad season wasn’t his fault, which points the finger directly at his teammates. 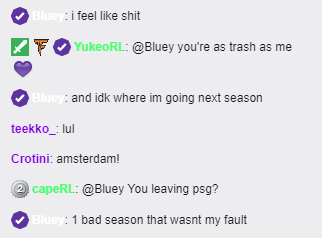 Take it with a grain of salt

Considering that the screenshot is missing a lot of context we suggest that you take it with a grain of salt. But the rumours were nurtured even further when Bluey apparently played in yesterday’s Gfinity tournament together with Scrub Killa, the 14-year-old 1v1 genius from Scotland, and gReazymeister, who has been benched by Team Envy and is currently their substitute player. Vitality’s manager and Rocket League community veteran Gregan asked Bluey in a Tweet if this might be his future team to which the PSG player responded “who knows”.

ur nuts, and who knows 😀

Maybe Bluey is just trolling (and chooses the worst time to do so), but given their disappointing RLCS S5 run, and the obvious frustration it must have caused, these rumours might be on to something, even though it would be quite reactionary to disband after just one unlucky season. However, a team of Bluey, Scrub Killa and gReazymeister would definitely promise a lot of potential: during the aforementioned Gfinity tournament the three players didn’t lose a single match.

What do you think? Is Bluey leaving PSG? And would that be a good decision on his part? Head over to our Discord server and discuss the latest Rocket League news with our community.