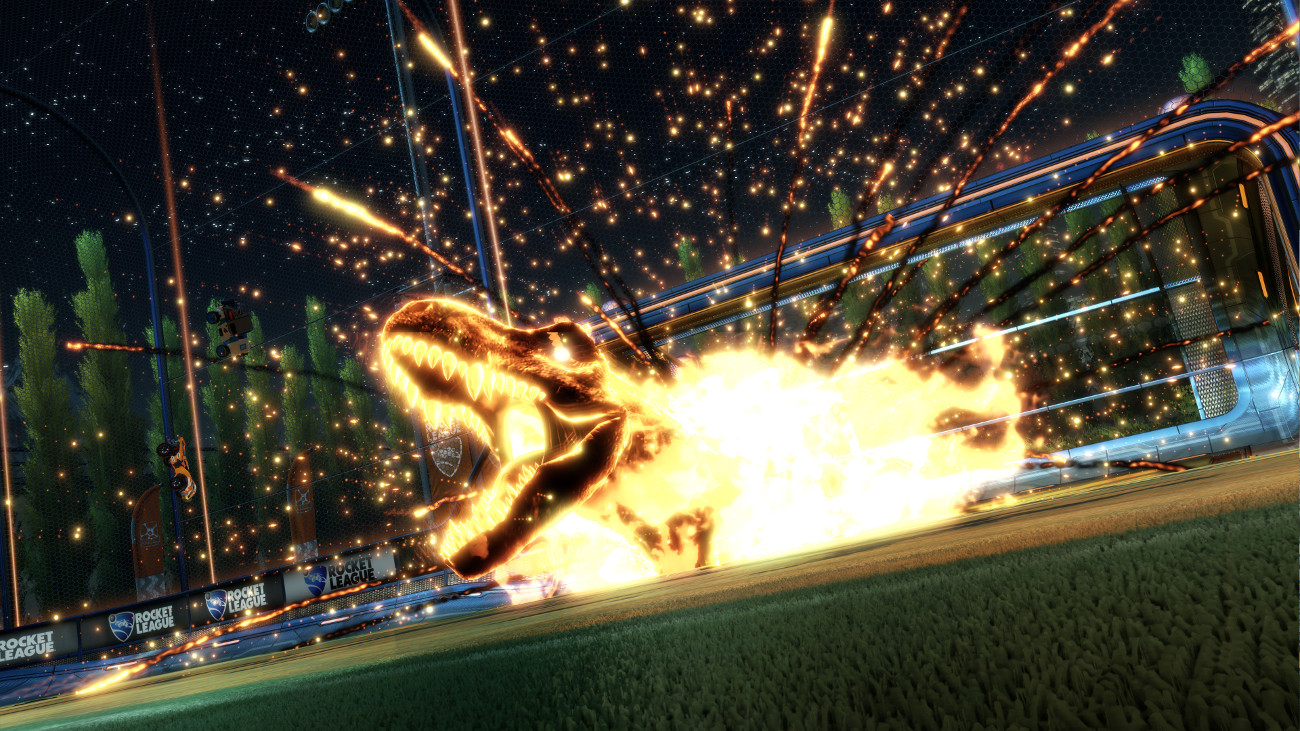 Earlier this month, it was announced that Psyonix will collaborate with Universal Studios to bring a Jurassic World-themed DLC pack into Rocket League. The update contains not only the iconic Jeep from the movie series but also a Tyrannosaurus Rex goal explosion.

Even though we know that most pro players will probably never use the Jeep, we wondered what they think about the latest addition to the game, specifically the new goal explosion which makes a lot of noise. Some of the pro players already took their opinion to Twitter:

Two of my fav things combined into one :DD pic.twitter.com/7Dp6bufsHX

Doomsee has quite a different opinion about the sound:

“Loud screeching in your ear, still looks cool though”

We asked Doomsee what exactly he finds so annoying about the sound of the explosion. He says: “The goal explosion is actually super cool. I’ve always loved Hellfire and the T.Rex style of it is a lovely touch, but the sound…oh god, the sound. At first it sounded pretty cool, a T.Rex roaring is always fun, but after a few times it’s just a loud screeching in your ear. Still looks cool though.”

In case you wonder now what the explosion actually sounds like, here’s a short clip showing both, the Jeep as well as the roaring T-Rex explosion.

There are some other pros who also aren’t that fond of the goal explosion. Joro, who played for The D00ds this past season, says: “Honestly, I think the goal explosion is underwhelming, way less hype than it looked like it would be in the trailer. Maybe the sound stuck out at first, but I got used to it. The airhorns on Salty Shores are more annoying in my opinion.”

RLCS caster Shogun has a humorous approach to the new goal explosion: “Everytime I score it sounds like the T-Rex is screaming BAAAAAD at my opponents. It is aimed at my opponents, right?”

All banter aside, it’s clear that collaborations like the one with Universal add fun new elements to the game that might draw the attention of casual players.

Vel from Team Expert says: “It’s awesome to see that Psyonix listens to the community and adds more cars with the Octane hitbox. The new goal explosion looks insane! I would recommend it especially to new players, since it is a cheap way to get one of the best goal explosions in the game without challenging your luck with crates. I am excited for more content and DLCs in cooperation with other publishers. These cooperations add new elements to the game and might attract new players to play Rocket League.”

You can use the goal explosion with any car

We saw many people on Twitter asking if the T-Rex goal explosion is somehow bound to the Jurassic Worlds car. As Psyonix clarified, this is not the case. You can use the goal explosion with any car you like.

Hi Ben! The ‘T. rex’ Goal Explosion is part of the Jurassic World Car Pack DLC, but it can be used with any Battle-Car in Rocket League. Thank you! https://t.co/fOxFPQy2qF

What the community says about the goal explosion

Even though some of the pros aren’t overwhelmed with the goal explosion, the community seems to love the latest DLC.

finally gonna have a sweet goal explosion. nice work on this dlc guys.

I do love all the other items you included tho. I am in love with new goal explosion!

What do you think about the latest DLC? Join our Discord server and discuss Rocket League with people who love the game as much as you do!

Insolences is out of Rogue

Opinion: The reason LANdon was the best RLCS World Championship to date