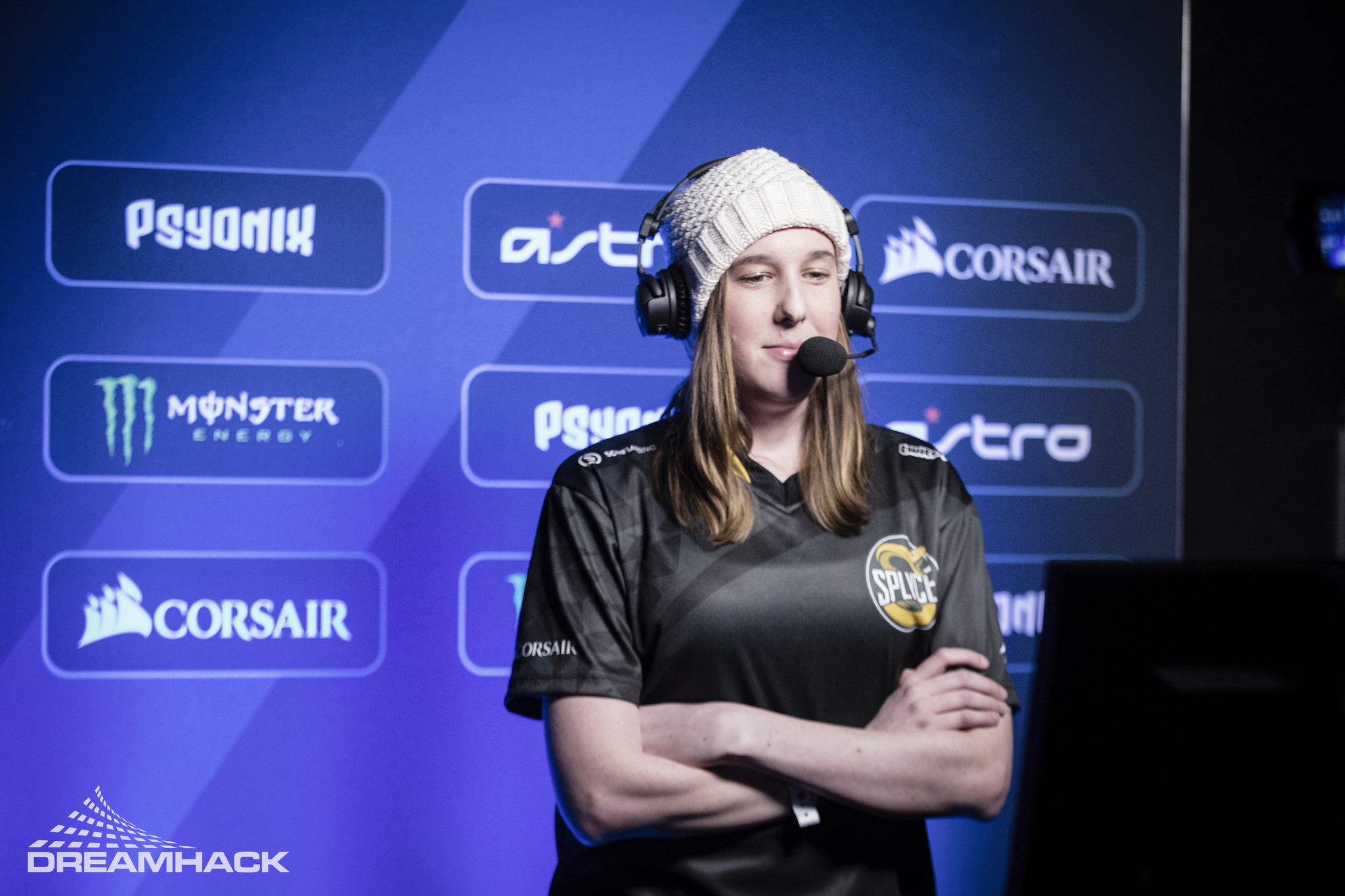 Interview with Splyce’s Karma: “I started crying, realizing what was happening”

Karma has been around the Rocket League scene for years, now her dream finally came true: She and her Splyce teammates qualified for the RLRS. In an incredible run through the Play-In they showed why their #1 seed was completely justified.

This weekend Splyce will go into their first RLRS matches. We reached out to Karma to talk to her about the Play-In, her teammates and the moment she realized that she and her team qualified.

With an amazing run with @Splyce through the lower bracket, her performance helped secure a Rival Series spot!#RLCShttps://t.co/PpKjSDWZR1 pic.twitter.com/aN9S6W3Gew

First of all: Congratulations on reaching the RLRS and being voted the MVP. You and your teammates were the #1 seed going in. Going into the tournament everybody was convinced that you’d qualify for the RLRS. Did these expectations put you under a lot of pressure or were you able to just block them out?

We didn’t really feel any pressure. We were confident going in, scrims had been going well, we hadn’t lost a tournament yet. We expected tough series from everyone. Going in as #1 seed everyone is ready to play you, so we definitely didn’t think it would be easy. Thankfully, we got the job done.

Up until Incognito your run through the Bracket was just clean and perfect. You went 3:0 against many teams and then all of a sudden a 2:3 loss against Incognito. Did you expect them to come out so strong?

We expected every team to go as hard as possible against us, like I said, we were the big bad #1 seed.

You’re the captain of Splyce. In how far was it your job to motivate the guys again and give them the confidence to qualify for the RLRS despite that one surprising loss?

I take a lot of pride being the captain of my team. I saved all the replays of our games and watched them back right after we lost. I saw us playing really well and Incognito making some unbelievable saves. It wasn’t that we weren’t playing well, it was just Incognito playing out of their minds, they did everything so well it was quite nice to watch in replay. I was looking to see what mistakes we made and of course there were some, but more of just the other team playing well. I had the whole team watch replays together and showed them that it wasn’t anything we did extremely poorly just tiny things we can fix.

Tell me a bit about what was going on after you defeated Lights Out! 3:1, which meant you were qualified for the RLRS, making your dream come true after years of hard work. Lots of jumping around and cheering or were you just stunned and in disbelief? What was the first thing you did?

With about 30 seconds left in the Lights Out series we were up 5-1. I started crying (embarassing I know), just kind of breaking down, realizing what was happening. Trevor (Nose) yelled out “Karma stop crying, there is 30 seconds left, finish this thing out OMG!” and Jake (Jwis) just started laughing. I couldn’t help but feel overwhelmed by my teammates, coach, former teammates, friends, and just all the work we had put in for such a long time.

Our teamspeak channel got raided by everyone and I thought I muted my mic because I didn’t want everyone to hear me sobbing. My grandma and my Mom came running downstairs because they thought we lost and were concerned, but when they found out I won they couldn’t understand why I was crying! My Mom made me get off the computer and drink a beer with her so I could relax, hahaha.

At the end of the NA Play-Ins you were voted MVP of the day – well-deserved in my opinion as you really did some incredible plays. People praised your performance on Twitter and Reddit. What was for you personally the single greatest moment in the aftermath of the Play-Ins?

I was greatly appreciative of being voted MVP of the Play-Ins, but honestly it was a team effort. My teammates just put me in the right spots and it just so happened to be me scoring but we’re truly a team, at any day one of us could be scoring. It’s just how we are as a group. Truly a team effort.

“It was a team effort”

Personally the greatest moment was seeing my teammates and coach bounce back after losing in the semis and grinding through the Lower Bracket to make it in. It is just an example of what we are as a team, we persevere, lift each other up, and trust in each other.

I started Rocket League way back in the day with a few moderators of my Hearthstone stream. We had a blast and I couldn’t help just playing on my own for fun and just started grinding it.

WELL FUCKING DESERVED. Player of the week goes to @KarmahTV

As mentioned by many you’ve worked really hard for years to get to where you’re now. Have there been moments in the past years where you just considered quitting Rocket League altogether?

I’ve been extremely frustrated having taken this long to be a part of a league play system for Rocket League. This will be the first season for me having a consistent team and making a league over the next few months which I think will contribute greatly to all of us. I had considered taking a step back from competitive having been offered a few other opportunities in the industry. I knew however how much of a competitor I am and how much I knew that I could compete with the top, just needed to continually grind and find teammates with a similar mindset that clicked. Looks like it paid off!

“I knew that I could compete with the top”

How did you got together with JWismont and DudeWithTheNose in the first place and when did you realize that these two guys might be the perfect addition to the Splyce roster?

Trevor (Nose) and I talked quite a bit at RLCS World Championship in Washington and I told him how much I admired his personality. He isn’t afraid to speak his mind and when you combine that with how good he is as a player, we could work really well together. We decided to try stuff out, after Dreamhack we talked to Jake (Jwis) and everything just went well. Jake had the same attitude as Trevor and a bit of a different playstyle that meshed well with us. Add our Coach Jimmer on top of that and we have a recipe for a great team!

You guys persevered and proved that you deserve to punch your ticket to the #RLRS pic.twitter.com/gRPTGi9rHB

“Play our game and improve”

Now that you’ve qualified the journey has just begun, as many weeks of RLRS League Play lie ahead of you. How do you prepare for the upcoming challenge and is there a specific goal that you have set for youself?

In the upcoming weeks we’re just going to continue grinding like we were for Play-Ins. Fix our little mistakes and continue working together and growing as a team. We don’t really have any specific goals set other than to just play our game, work on ourselves, and improve.

The persistence and professionalism that @KarmahTV has displayed since the very 1st season of the RLCS FINALLY pays off!

For all of you players hoping to eventually make it into the RLCS/RLRS, I hope you’ve been taking notes. pic.twitter.com/XHCPOiCdXT

You’re also an avid Twitch streamer and have been behind the casting desk on several occasions. In preparation for the Play-Ins you already cut down on your streaming time. How much time will you have left for streaming once League Play starts this weekend?

You have a lot of fans out there. Anything you want these guys to know?

Hard work, dedication, passion, and talent go a long way. Never give up on your dreams no matter how out of reach they may seem, if you have the talent, do it! Sometimes life hits you with things that are out of your control, keep the faith, find what you love, don’t settle. Go. Get. It.

Dorian Gorr
Dorian discovered Rocket League when it first came to PS4. He stopped playing after he saw the RLCS for the first time and became discouraged from trying any more miserable Aerials. As a journalist with more than a decade of experience working for many of the biggest German media companies he now lives out his Rocket League passion as Head Editor for Rocketeers.gg
doriangorr
Next Articles
Fairy Peak is the Rocketeers Player of the Week
EyeIgnite: “I want to be the Eminem of Rocket League”
CompLexity’s Mognus: “I can’t wait to see where it goes from here”