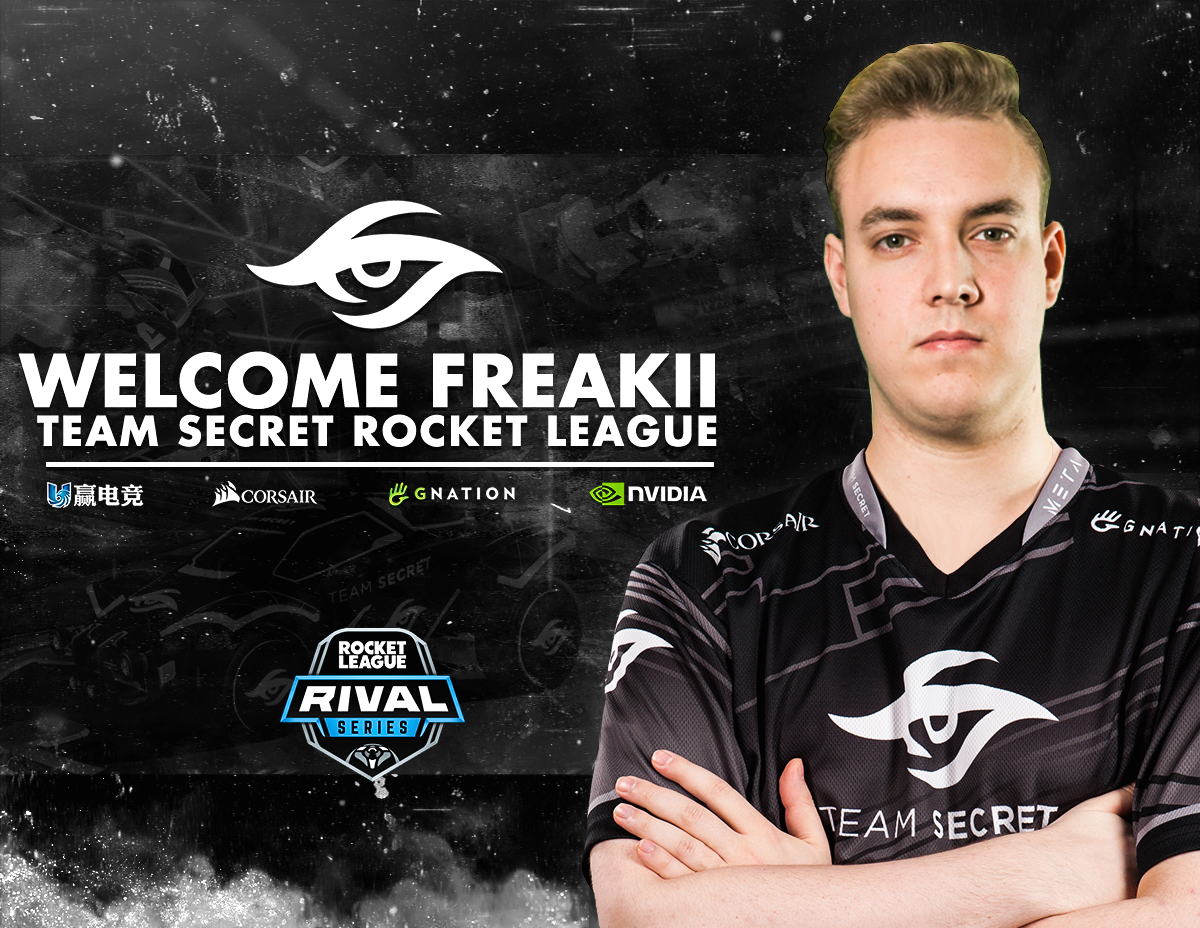 Update (original story below): Freakii has found a new home. The German Rocket League player will play for Team Secret in the upcoming RLRS. He comes in as replacement for Tigreee who left to join Mousesports.

We can’t wait to see him compete in the RLRS this September alongside @Secret_Tylacto & @FlamE_RL ??? pic.twitter.com/hmFe6HkMgd

Couple of weeks ago, it was announced that Sandro “Freakii” Holzwarth won’t be part of Vitality’s active Rocket League roster any longer. The news came as bit of a shock: There had been rumours every now and then suggesting something along those lines, but aside the disappointing performance of the whole Vitality team at the World Championship, Freakii seemed to have improved a lot over the course of RLCS Season 5, and it reflected in his team’s performance.

Nevertheless, Freakii is now out of Vitality. And in the weeks following the news of his departure, it became kinda quiet around the German Rocket League player. We reached out to him to talk about his past season, the disappointing result at the World Championship, and -of course- his split from his long-term teammates Paschy and Fairy Peak.

“It was more a problem with the mindsets”

Freakii, you’re off Vitality’s main roster. How are you feeling today, now that a couple of weeks have passed?

Well, I’m not that mad or sad about it since I feel like I had a good time under Vitality, and overall I played a good season of RLCS and Gfinity. Having to part ways with them is obviously sad, but I’m also really thankful that I was able to perform for them, which is why I’d like to thank everyone in Vitality and Renault Sports for their trust.

In retrospect you had one hell of a season: You and your former teammates Paschy and Fairy Peak won Gfinity Elite Series and qualified for the World Championship. It’s kinda hard from an outsider’s perspective to figure out what led to the decision to let you go after what seems to be a decent season. So, what’s the reason for the split?

It was more a problem with the mindsets than the actual performance I’d say. Overall our season was pretty decent, and after the regionals we had a huge relief of pressure which made us play worse in the weeks before the World Championship. All of us got nervous about the situation, and we wanted to solve these problems differently which led to internal dissent. We weren’t able to figure it out before and after LAN so someone had to go; eventually that was me.

sucks to suck, was a great journey this season tho. thanks for your guys support❤

“I wasn’t satisfied with how we scrimmed”

We couldn’t solve the problems that came up before LAN, and since we didn’t agree on any possible solution, LAN didn’t go any better than the tournaments during the weeks before. Everyone of us has a different opinion on why it didn’t work. All I can say is that I wasn’t satisfied with how we scrimmed and trained, because we weren’t really addressing the big problems.

When did you learn about the team’s decision to let you go, and did you see it coming somehow?

To be honest, I was pretty sure I already had to leave mid-RLCS since infos about them tryouting someone else before RLCS s5 gave me the feeling that I wasn’t really appreciated in the team, at least by Paschy and Fairy. I kept on trying my best for the team and Vitality, but I never really had the hope of having a spot in the main line-up for the next season. Paschy told me the day after LAN that they want to tryout other players, and he already had some in mind. It was pretty clear for me that I wouldn’t be able to team up with them anymore aswell, since we wouldn’t have worked together if there was no trust anymore. Vitality discussed a long time if they should split us, because they saw a potential world class team in us and didn’t want to throw that away. In the end we all agreed on why I had to leave and I’m fine with their decision. The support Vitality gave me throughout the season was incredible and it definitely was the best experience I had with any organisation ever.

To clear things up. I did NOT leave Vitality and I’m still under contract! Paschy and Fairy don’t want to team with me anymore and I’m fine with it. I will look for options and see if I keep playing on top level or if I go into being a streamer. Your guys support means alot!❤

Most fans, casters and experts agree that you improved a lot as a player during the past months. Did you just practice a lot more or how did you manage to improve so noticeably?

I was focusing on me a lot, yes. I had the ability to not only use Gregan as our manager, but also as my personal coach who could tell me where to improve and what to do to play better. All his tips were really helpful to my game, and I’m really thankful he took his time to help me improve!

What can you tell us about your plans for the future? Are you actively looking for a new team?

At the moment I’m still thinking about my future. I’m not sure if I want to keep playing at the top level, although it was a lot of fun. If I find the right teammates, I would try it, but I’m still debating on what to do at the moment. Vitality and I had a talk, and we agreed on giving me the possibility for other spots. Vitality is also super supportive in what I want to do next. For them I’m still one of their players and they only want the best for me.

The other day you just tweeted “PENTA Sports”. Is that a not so subtle hint at a possible return to your former org?

No, it was just a fun tweet. As much as I liked playing with Pwndx and killerno7, I wouldn’t wanna go back to the org we played for, since we didn’t have the best experience on how they treated Rocket League. Nothing against the org though, PENTA was really nice and supportive, but their overall organisation is more focused on CS:GO, I would say.

When you announced that you’re off the roster, you got a lot of positive vibes from the community. To conclude this interview, feel free to send out a message to your fans out there! Anything you want them to know?

I always tell them that I’m super glad that they’re behind me and are giving me all the support. I love every single one of them, and I’m just happy to see so many people support me even in bad times. I hope they will understand whatever decision I’m gonna make: I love you guys!

What do you think about the latest roster shuffles? Head over to our Discord server and discuss all things Rocket League esports with the community.

Interview with Mousesports’ Alex161: “Our goal is to make Top 6 in the RLCS”

Time for a revisit

Here are our 5 most popular stories after 6 months of Rocketeers.gg