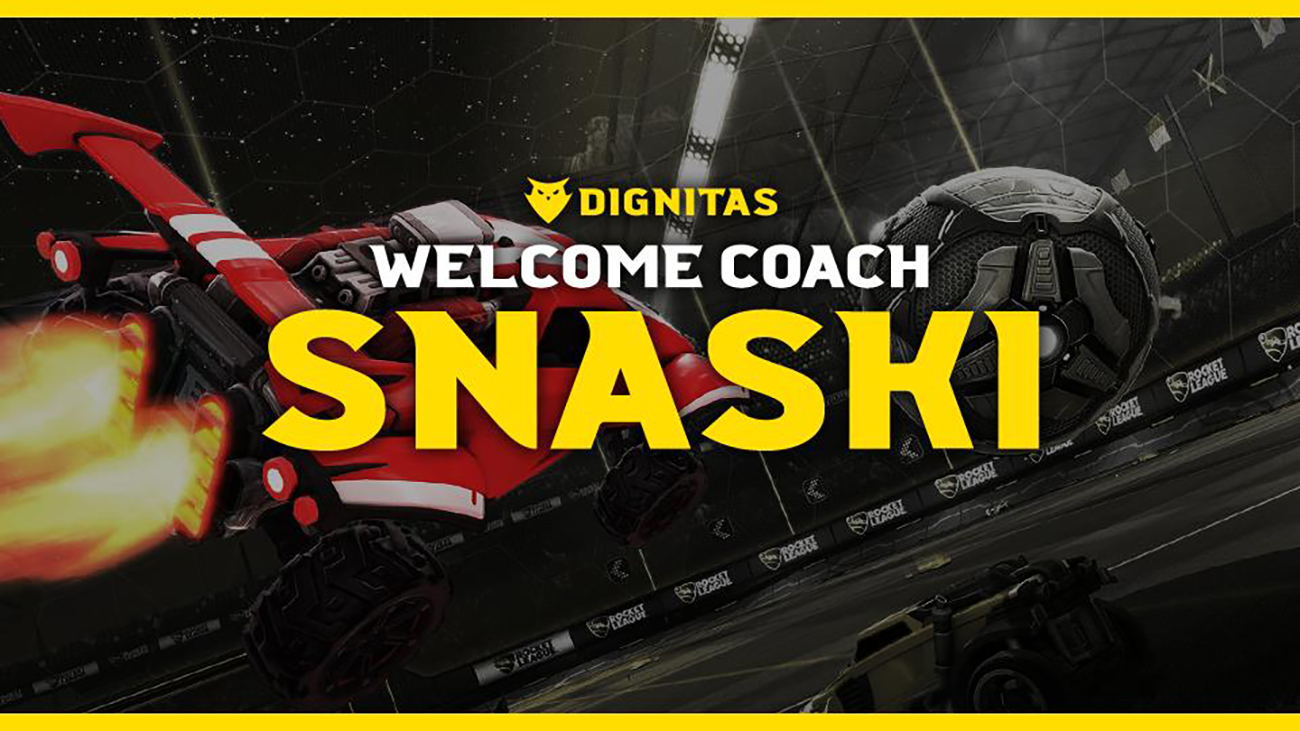 Snaski about his new role as Dignitas’ coach: “I am ready to move onto a different career”

Every good Rocket League team needs a coach. But only few have such an experienced one: Earlier this week, Dignitas announced their latest addition to the squad: Nikolai “Snaski” Vistesen Andersen, Rocket League veteran and former pro player.

We are excited to announce that Nicolai @Snaski10 Vistesen Andersen will be joining the team as our Rocket League Coach!

Snaski’s last station was Fnatic. After two rather disappointing RLCS seasons (7th and 8th place) their time in the RLCS ended when Savage! beat them 4-1 in the Promotion Playoffs, sending them down to the RLRS. In the aftermath of the relegation, Fnatic pulled out off Rocket League, leaving Snaski and his teammates orgless.

Now it seems that the Danish player’s professional career as a player has come to a halt. As the coach for Dignitas’ championship winning squad he will take on a new role and new responsibilities. We reached out to him to talk about this new challenge.

“My real dream was to work behind the scenes in esports”

I have spend a lot of time thinking. Ultimately, when I started playing Rocket League I never intended for a long career, because my real dream was to work behind the scenes in esports, on a bit more of a business level – so I saw Rocket League as a good opportunity to get my foot in the door.

So to be honest the decision about taking a step back from playing wasn’t that difficult, but figuring out how I will be able to move forward was very difficult. I had no idea on how to move up the esport ladder so to say. I randomly one day spoke to ViolentPanda and jokingly said I could coach them, and he typed to me afterwards with a link of where to apply if I was serious about it, and suddenly it was like all the stars aligned. I was able to continue to work in the community which has been my home for 3.5 years now, use all the knowledge I have gathered throughout my career, and get to work with one of the longest standing and most respected organisations.

How did you get in contact with Dignitas and how did you convince them (or vice versa) that this would be a good fit?

I randomly saw that they were seeking an analyst on twitter, but didn’t think much of it. As I said above, Panda kind of reminded me, and I applied. Due to my past in RLCS the guys decided to give me a trial shortly before Dreamhack Leipzig, and I sat in on their scrims the days leading up to Dreamhack and throughout. That being said though I refuse to take any credit for their performance at Leipzig, that was all them. But after Dreamhack the guys were convinced I was the one and now we’re here, hoping to continue the success.

“Yes, this means I am retired”

Does this mean that you’re retired as an active pro player for good or is this more or less just a break from your career as a player?

Yes, this means I am retired. It is awful to say it officially, but I believe I am ready to move onto a different career.

“I have been a leader throughout most of my career”

Tell me about your preparation for this new role. In how far do you need to have a different look on the game as a coach compared to an active player?

Honestly, not that differently. I believe the biggest reason Ferra, Sikii and I were able to make a good run in season 3 was due to the fact that we were extremely analytical of the game, and were very good at finding flaws in our opponent’s game. I have also been a leader throughout most of my career, so I am used to most of the responsibilities that have been given to me, and basically I am able to take some work off of Panda’s shoulders.

Finally we have our own healthy gamer coach! 🙂 https://t.co/7q8lqUmtm8

You’re obviously one of the most experienced players in RLCS history. What would you say is your biggest strength as a coach that you can bring into the team?

As stated above I think I am very analytically gifted, and it comes super easy to me to catch people’s and team’s tendencies.

It might be a challenging task that you have to coach one of the, if not THE best Rocket League team in the world. Let me phrase this provocatively: What can you teach players like Turbopolsa and ViolentPanda who have achieved everything there is to achieve in Rocket League?

My biggest concern moving in on this was obviously if they would be able to respect me, since compared to them, my career was very mediocre, and even that is probably an overestimation. To my positive surprise, I found out very quickly that they indeed respect my opinion as if I was a 4th member of the team, and honestly that is really all that some teams need.

When it’s only 3 people in a team, it is very easy for 2 people to go against the 1 person, and even though the 2 people are in the wrong, that is the opinion that wins, since it is a majority of the team. Having a 4th person can counteract this, because suddenly you’re 2 against 2 that don’t agree, and then you can try and work it out from there, and not just overrule an opinion. Obviously, I’ll take a closer look into their scrims, opponents, team atmosphere and communication as well, but in most cases just having that extra opinion is the most valuable part in my opinion.

?? Might do a twitlonger later to explain, or maybe I won’t. We’ll see what the mood is like ? https://t.co/iQIdHwj2xQ

Being the best team in the world can also transfer into a lot of pressure as everybody expects this team to perform well, and nobody will ever underestimate you. How do you guys deal with this pressure?

You would think that the guys feel the most pressure from the fans, and all the high expectations, but the amazing thing about competitive players is that they pressure themselves more than anyone else. I truly don’t believe that any of the players feel any pressure to perform to the expectations of the crowd, they’re only afraid of disappointing themselves, their organisation and hopefully me (probably not).

“Our first goal is getting to Worlds”

With the new RLCS S7 approaching, I guess you’re currently preparing for the challenge ahead. How are scrims going so far and what are your expectations towards the new season?

I refuse to reveal how scrims have been going as I am afraid of becoming another meme, *Cough* Gregan *Cough*. They obviously have a new member in Yukeo, and he has big shoes to fill, but I think we’re seeing good progress every single day with him, and hopefully we can ramp up to peak during RLCS. Our first goal this season is getting to worlds, hopefully through a top 2 placement, and then we’ll take it from there.

taking a step back from streaming, gonna be less than usual, since my girlfriend came to my place and have to focus on improving for RLCS. Hope thats understandable. Gonna try and hit at least 2 streams a week if possible of course

How do you rate Snaski’s transition from player to coach? Join our Rocket League Discord server and discuss it with the community.

"We want to get into RLCS"