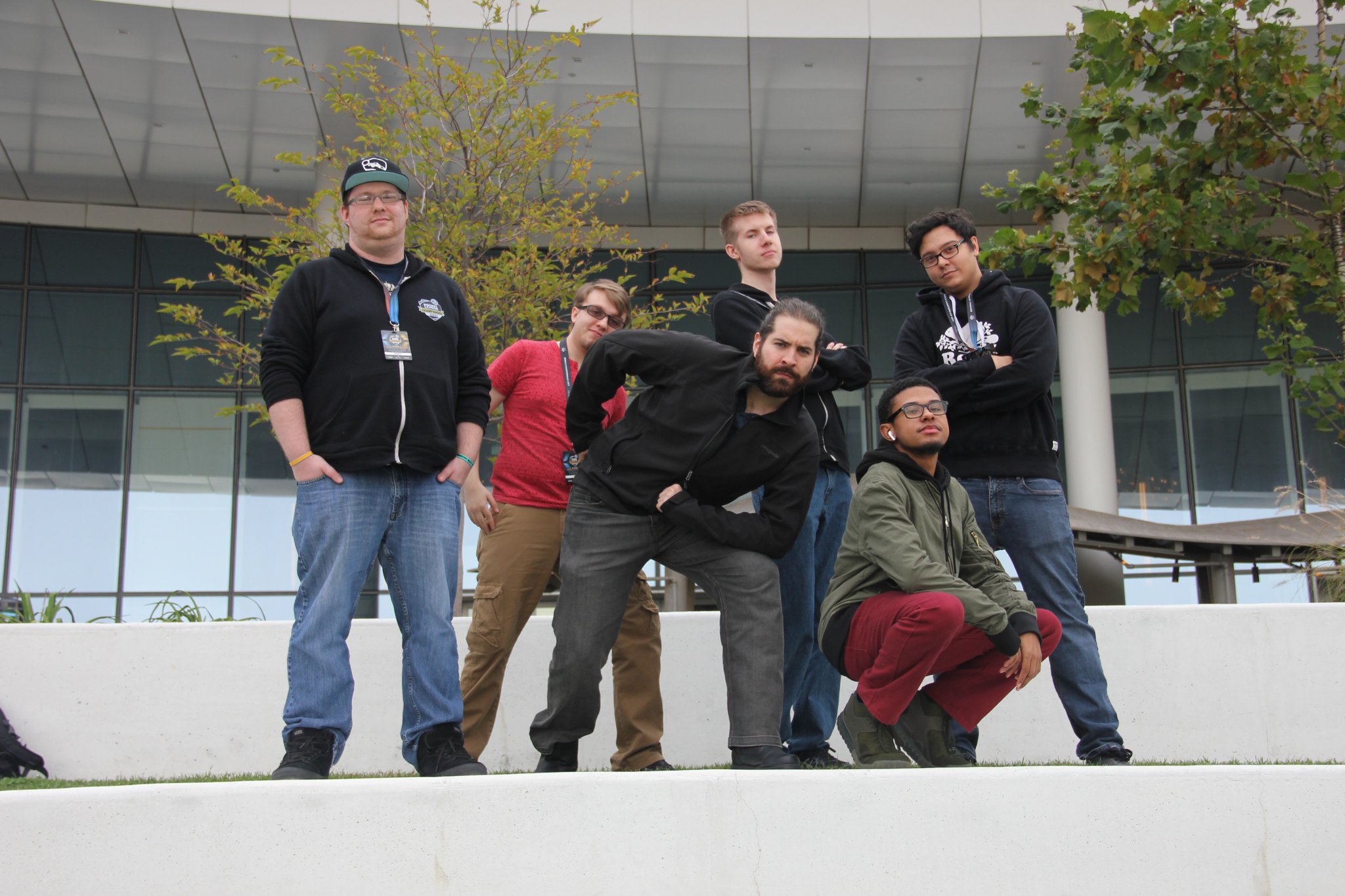 With 40 million players around the world and more and more of them playing in tournaments and streaming online, the Rocket League community pumps out a ton of amazing plays each and every day. Psyonix’s physics-driven design allows for all kinds of stunningly creative shots, but there’s such a deluge of clips now that it can be tough to pin down the truly amazing stuff in the pack.

That’s what The Rocket Dailies is for. Formed in 2016, The Rocket Dailies is a Twitter account that shares a handful of top plays each and every day, with nominees filtered down from a community-driven list of suggestions. Each clip arrives with its own wonderfully pithy bit of praise, and then it’s released into the world for people to like and retweet. There’s a purpose to that: the play that garners the most social media love each day wins the player $25 in real cash, with double awarded on Monday for winning the longer weekend span.

Real money and community adoration just for nailing an amazing Rocket League play? That’s good news for players, certainly, but everyone benefits from the curated feed of brilliant shots. It’s a must-follow for Rocket League fans, but you can be more than a passive observer—anyone can jump in and affect the nominations process. Here’s a look at how The Rocket Dailies decides the best of the best in the world of Rocket League plays.

The Rocket Dailies is a well-oiled machine, thanks to the incredible amount of time and energy that creator Alec Simone pours into it. Each day, members of the community submit plays via dailies.gg, whether they’re from the Rocket League Championship Series, other tournaments of varying sizes, or streamers’ feeds. By the end of the day, he has a pretty good idea of which plays are buzzing in the Rocket League scene—or should be—so he flips on the Twitch stream and lets the debate begin.

Sitting in the lower left corner of the screen, Simone guides the process as fans and even well-known pro players drop into chat and weigh in on each clip. Each play is shown on the stream, followed by a succession of “yays” and “nays” from viewers—and possibly much more in-depth debate. Choosing the day’s best plays elicits a surprising amount of passion from fans, who may describe what makes a certain play so special (or conversely, so common) and try to sway others to their cause.

This weekend’s $100 prize winner, of course, is @JKnapsRL with this blisteringly quick and beautiful double touch! Congrats! This is really superb. (via @DreamHackRL) pic.twitter.com/9J1uXPE0Ju

Watching the stream is a great way to better understand how high-level Rocket League plays develop, and how the tiniest car adjustment can make the difference between an amazing goal or just another forgettable crossbar bounce. And the debates can rage on for some time, as clips are sometimes slowed down to better accentuate how a player’s minute actions make all the difference in a play. Or, if further evaluation shows that the defenders aren’t putting up much of an effort, a play might get tossed. It’s not all about flash over context.

Just a few remaining nominees are picked at the end of the stream, and Simone tweets them out the next day. Players have been described as “screaming down from the heavens to slam this double-touch in” or “juggling on a unicycle and weaving his way through this whole defense,” for example, and then it’s left to Twitter to decide which play garners the most attention. And then it all starts again, with The Rocket Dailies running six days a week.

The Rocket Dailies has only been around in this current form for just over a year now, but for the 27-year-old Simone—a freelance web developer and marketing consultant—it’s really the culmination of seven years of web projects under the same kind of philosophy.

“In college, I realized that the problem that I was having with the internet is that there was way too much stuff. It wasn’t about trying to find cool things—it was about trying to weed through all the crap and find the absolute nuggets,” he explains. “I have always been obsessed with creating discussions and a place for people to have discussions about various things, and filtering the internet down. And those two things kind of converged in this project for The Rocket Dailies.”

“I have always been obsessed with creating discussions”

He first launched it as All Things Rocket in August 2016 and initially tweeted out an array of Rocket League tidbits, from cool plays to esports news, roster updates, and tournament results. But it was too broad of a focus, which didn’t really fit with his own mantra. However, the highlight clips were clicking with players and community members alike, so he trimmed the fat, rebranded as The Rocket Dailies, and started building around that premise.

Interest started to surge when he added the cash prize last February, and now The Rocket Dailies’ 7,000+ followers include many of the pro scene’s best-known players. Twitch subscriptions and bit donations, along with cash donations, help defray the expense of hundreds of dollars spent each month on prizes—but Simone concedes that “the lion’s share comes from my bank account.”

The Rocket Dailies remains a passion project for now, and it also takes up all of his free time—usually four or more hours per day, six days a week. But it’s also the first step towards potential other Dailies feeds and sites for different esports games or even non-gaming topics. “I think of what I do as ‘The Dailies,'” he suggests. “It’s this infinitely-expandable concept that could go extremely wide and not be a very niche Rocket League thing.” 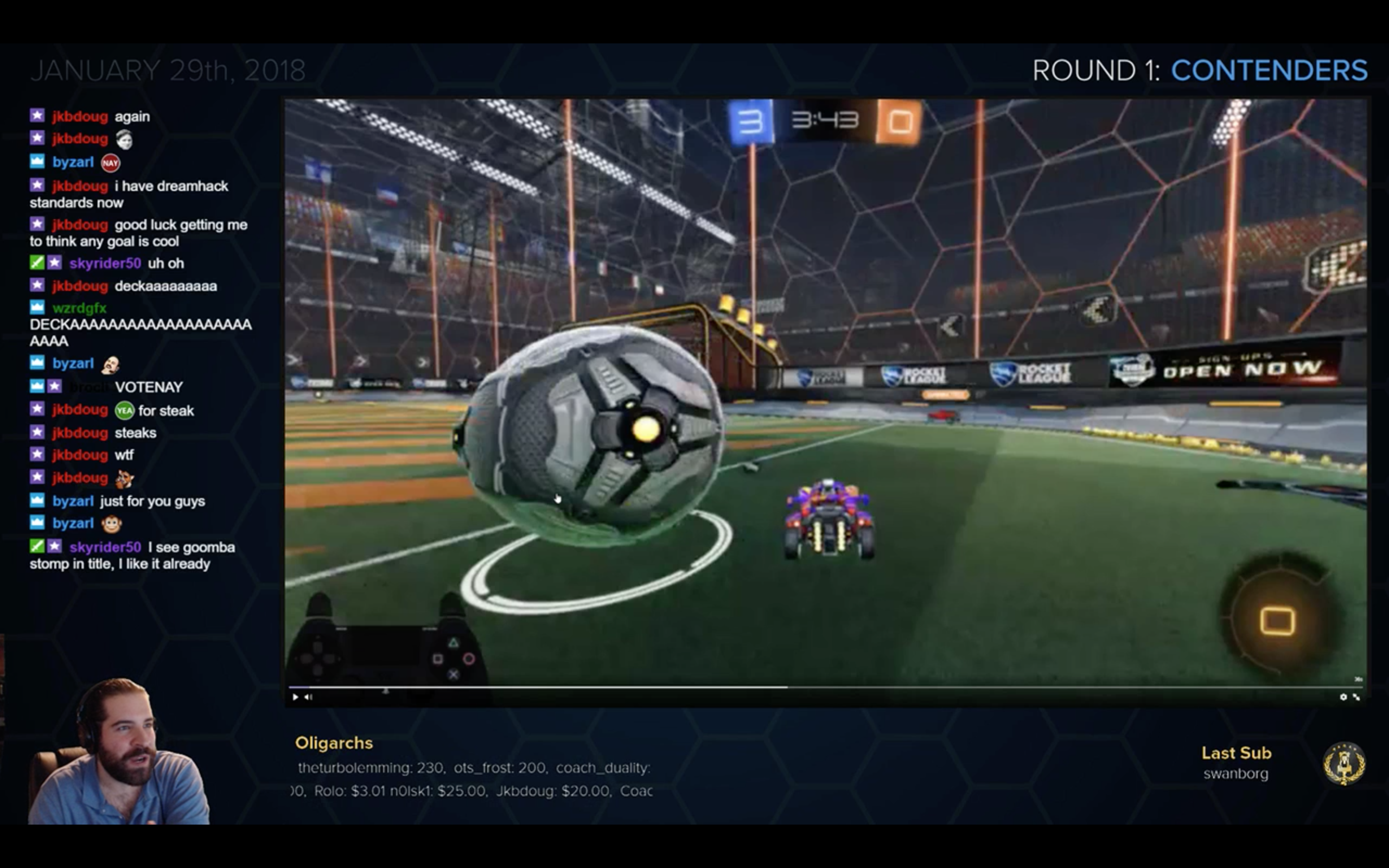 Alec Simone shows the best plays in his Twitch show | Credit: A. Simone

Simone may lead the show, but with the launch of the consistent Twitch stream a couple months back, he has really ceded control over submissions and voting to the community. And admittedly, he’s not always keen on how The Rocket Dailies has been perceived, at least in terms of which kinds of plays define its daily output.

“One of the things that I’m sort of upset about at the moment is that I feel like Rocket Dailies has become more synonymous with flashy, crazy things,” says Simone. “I would much rather see it be something that is about the core skills of Rocket League, and be more about really solid play—and less about, ‘Holy shit, that guy flipped upside down like six times on that play.'”

Our conversation follows an epic 2.5-hour stream that started with about 30 plays, but ended up with just a few nominees—and there was plenty of debate about which plays deserved the love and why. Simone cites a TED talk given by writer Malcolm Gladwell about the search for the perfect pasta sauce, and how researchers ultimately decided that there are varying “taste clusters” for any given thing. And just like your version of the perfect pasta sauce might differ from someone else’s, it’s much the same with Rocket League highlights.

“There is no perfect Rocket Dailies clip”

Ultimately, Jhzer’s flashy passing play won that round of voting, although the popular streamer donated his winnings to another player whose highlight he prefered. Simone’s personal picks may not always win the day, but that’s what happens when the community runs the show—and The Rocket Dailies has helped elevate Rocket League highlights to something of an art form. In any case, he’s thrilled with the way the process has been embraced.

“What’s meant more to me than anything else is how many people want to help pick the plays that get nominated,” he says. “There’s a core group of people who show up to the stream most nights, and that’s the coolest thing in the world to me—that these guys will sit there and argue, and even get passionate and angry about which plays should and should not get in. Like, not only have they been massively helpful in picking better plays, but just that they’re eager to help in the first place is so amazing. That they care about this thing. We’re starting to build a little community around it, and that makes me so happy.”

“Like I said, I’ve been trying for years to create a space to have semi-serious discussions online,” he concludes, “and I feel like I’ve finally found my people.”

Lead image: Thanks to Zeebo. Alec Simone (in the middle) with members of his community at the RLCS S4 World Championship

Andrew Hayward
Andrew is the Lead Editor of Rocketeers, and has been covering Rocket League esports since RLCS S1 for publications such as Red Bull Esports, Esports Insider, The Esports Observer, and Waypoint. He is also currently the Content Lead for The Esports Journal magazine and has written about games, gadgets, etc. for 100+ publications since 2006.
ahaywa
Next Articles
Axeltoss: “Ting Open will be the better Super Bowl”
We Should Stop Talking about G2’s Inconsistency
Rocket League finally gets a Tournament Mode