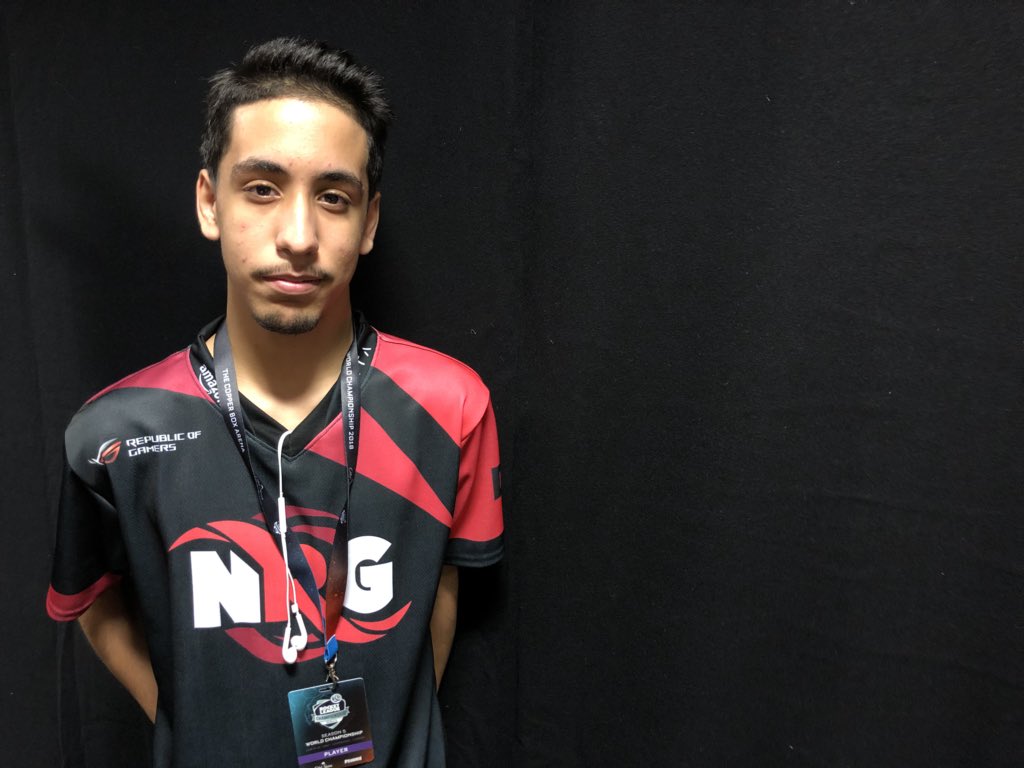 The whole community was in shock when NRG and Jacob split. And many seemed skeptical when it was announced that his replacement will be a 15-year-old player by the name of Justin Morales, better known as jstn.

Couple of months later, NRG have played a season for the record books, going 7-0 in league play (something no other team has ever been able to pull off), and entering the World Championship as a team many consider to be NA’s favorite for the crown. Still, there are critics who remain skeptical that jstn is the right addition to the roster.

Prior to their appearance at the RLCS Finals, we sat down with jstn to talk about how he joined NRG and how it feels to be the youngest player at the World Championship.

I made LAN wtf

Jstn, you and your teammates played one hell of a season. Tell me a bit about how you met Fireburner and GarrettG?

I met them through Squishy (Cloud9’s star player SquishyMuffinz). I’ve known Squishy for a long time, and all my connections into the scene have basically been through him. I remember this one time I played with Squishy and GarrettG in a match, and was like: man, this guy is so good. I never would have thought that I would someday be on a team with him. After my performance in the RLRS I heard some rumours that teams were interested to pick me up. First it was Flyquest. Then some rumours said that NRG wanted me to join. And I was like: “Wait, are you guys serious? Who are they dropping? Apparently they’re dropping Jacob.” That was just mind-blowing. I practiced with them and it went well. I felt confident, and now we have this crazy season. I can’t believe that this is coming true. I never expected to go pro.

“The positivity paid off”

You went 7-0, which is amazing. Confidence is one thing, but did you actually expect such results?

I was saying all the time to GarrettG and Fireburner that we’re gonna go 7-0, but I think that I just said that to feel confident. I actually thought we could go 5-2, maybe 6-1. But then we stomped so many teams. And I kept saying that we’re going 7-0. After we went 5-0 I was certain that we could actually do that. I just said to myself: “Justin, stay as confident as possible. Don’t bring any negative attitude into that team.” I feel like the positivity paid off.

NRG Esports already has more wins than any other NA Organization in @RLesports, but last weekend @Fireburner_ @GarrettG34 and @Its_JSTN became the only team in NA/EU RLCS to go 7-0 in the League Play Standings!

How did you experience the feedback from the community after word got out that you’re Jacob’s replacement on NRG? Do you have the feeling that many people doubted you?

Yes! I went on Reddit and read a couple of comments, which I actually don’t take too seriously, but many people doubted me and I proved a lot of them wrong. I had decent stats throughout the season, and our team went 7-0. I wasn’t really playing for stats though. I was just playing super solid, doing whatever my team needed me to do.

“I don’t play for stats”

What are you adding to the team that was possibly missing before?

Brains. Back then, Jacob did whatever he wanted. He was all over the place. We now call out where we’re at, every position on the field matters. We communicate exactly how we’re going to react to a play, and I feel like that was missing before. Plus: GarrettG was playing defensive last season and wasn’t comfortable at all with this playstyle. He’s a monster on offense.

You’re only 15 years old and the youngest player at the World Championship. Do you think about that a lot?

It’s crazy. I’m going pro and I’m only 15. I’m still a teenager. My parents are still on my back 24/7. It’s just so unreal and I still have so much time to develop a YouTube channel, my stream, my playstyle with NRG, experience other LANs. This is only the beginning.

“My parents have been really supportive lately”

You mentioned your parents: How did they react when you went pro?

My dad is here today. My parents were skeptical at first. I played all day every day. My grades were okay, but not the best. But now they see that I’m going to London for this, that I qualify for huge tournaments. So they started to become supportive of my career as a player. Ever since I joined NRG they accepted it, they’ve been really supportive lately. A year ago that was quite different. This is what probably every young player goes through.