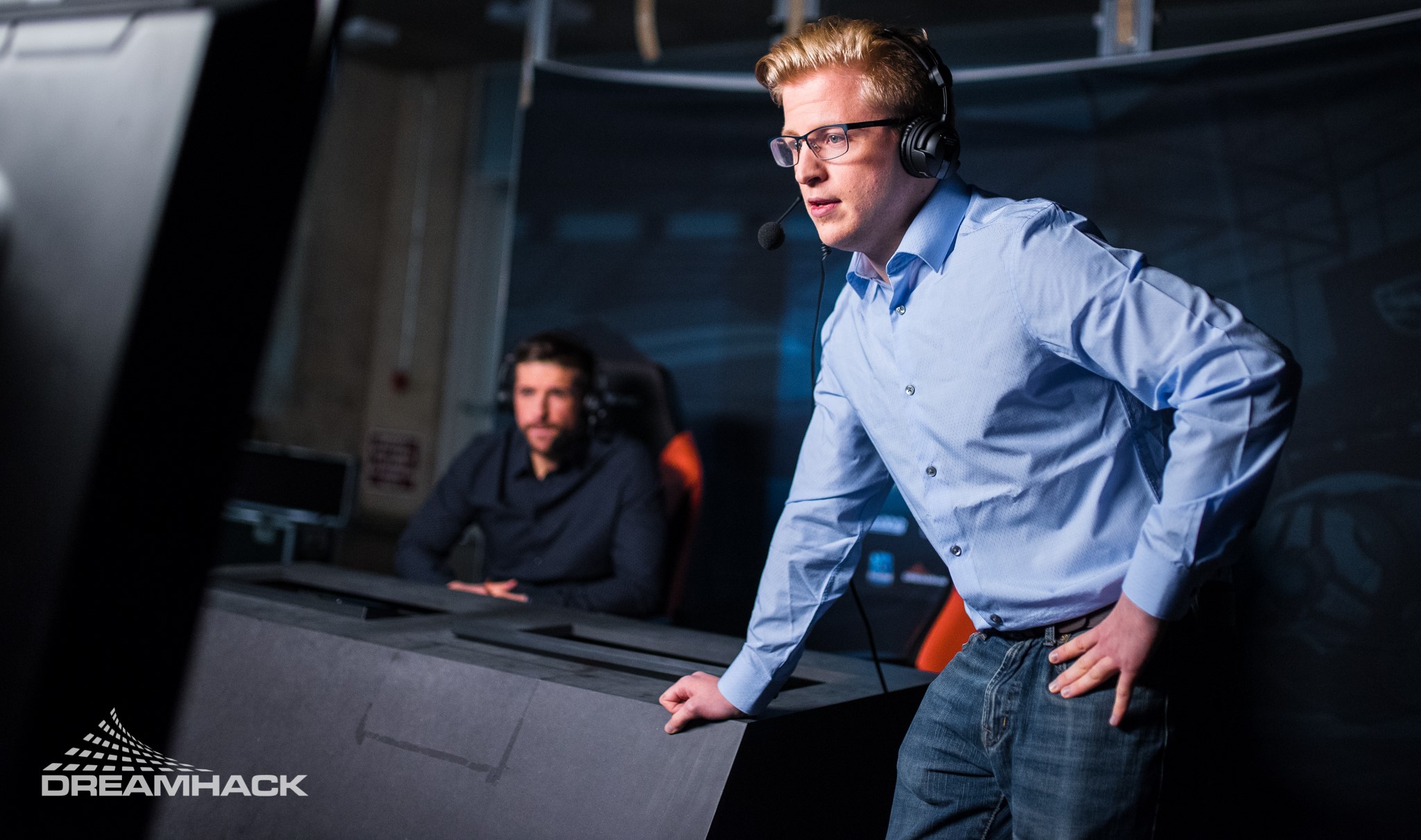 Jorby on his path to RLCS casting and growing from criticism

Joey “Jorby” Ahrens has one of the most recognizable voices in Rocket League, working his way up from the community tournaments to events like the X Games Invitational and NBC Universal Open before joining the Rival Series and Collegiate Rocket League. Finally, he was promoted to the Rocket League Championship Series (RLCS) desk starting with Season 7.

Initially, however, that was a voice that some listeners didn’t appreciate—and they made their opinions very clear to him. Jorby’s casting style has always packed an exuberant punch, but it’s one that needed further polish as he began casting more prominent tournaments and events. As the 27-year-old Jorby told Rocketeers in an interview during RLCS Season 8, it was very challenging to encounter that criticism when he first started casting major events.

“This profession has forced me to grow. As someone who receives all types of criticism—not just constructive—it’s really tough at first, especially if you’re not used to it,” says Jorby. “For somebody who wants to constantly impress people, knowing that I disappointed anybody, even when it comes in the form of a hateful comment of how much they hate my casting… it feels like a failure on my part.”

While Jorby admits that he was defensive about it and dismissive at first, he says he realized that there’s often a nugget of truth even in mean-spirited criticism. Instead of hiding from such comments, he tried to focus on finding something constructive to work from. Part of improving as a professional caster, he says, was figuring out how to maintain his enthusiasm without it coming across as abrasive or constantly over-the-top.

“I’m a hype guy, I’m a very excitable dude. That’s no secret, and you can’t take that out of me. It’s part of who I am,” Jorby admits. “That being said, there’s a bar, and I was constantly way over that bar. Like, they need me to jump five feet and I’m jumping 15. It’s really jarring for people and it’s really jarring for my ears. I listen to some of my early casts and I understand why everyone hated me. [laughs]”

“What am I actually contributing to the broadcast besides energy? It was tiring,” he recalls. “Early on as a caster, I was very tiring to listen to, and it was tiring to cast like that. I just never realized it until I tried to mellow out a bit.”

Jorby has been one of the enduring members of the second generation of RLCS and pro-level casters, and getting there was a long and uncertain process, he says. His interest in casting was first piqued by watching the Super Smash Bros. Melee tournament stream from Evo 2013, although it was a passing thought at the time. When Rocket League came out a couple years later, he said the game stoked his die-hard love of hockey (not soccer), and he and a buddy played it intensively. After signing up for a 2v2 tournament, he saw a note on Discord about a need for casters. His friend encouraged him to give it a shot.

“It was some of the most fun I’ve ever had doing anything,” says Jorby. “I knew from that first night I casted that 1v1 tournament that I didn’t want to stop doing this. I told MinecraftingDAD, who was the owner of Ghostboosters at the time, that I want to do the 2v2 tomorrow. I wanted to put myself on every single broadcast that any community org did. That’s where I started.” 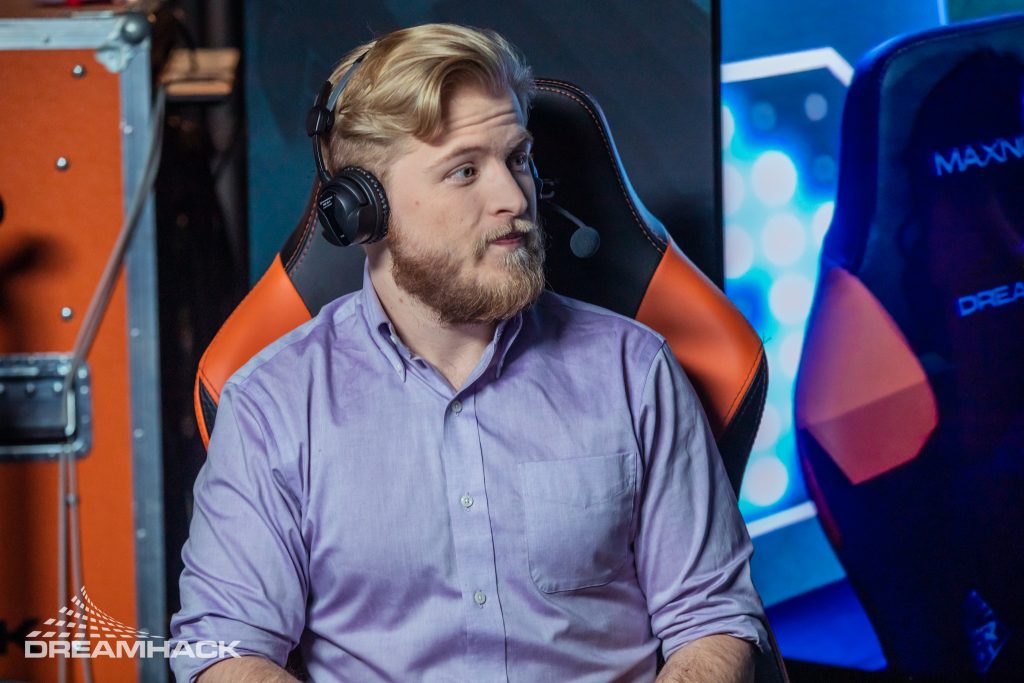 Although he dreamed of working his way up to the RLCS desk, there was no calculated process to get there, he says—nor really a clear path early on, since the first generation of RLCS casters had pretty much all been there since the league’s start. Jorby says his goal was to just be everywhere he could, pouring himself into every opportunity he could muster, in the hopes of that experience and exposure propelling him to greater things.

“I just wanted to put myself out there as visibly as possible, because I loved it,” says Jorby. “I formulated this goal for myself early on: I want to make the RLCS. I want to make it as an RLCS caster—that was the dream goal at the time.”

“Seeing all the OGs up there: WavePunk, Carpet, James in Season 1, Lawler, Lief—it was another world at the time, and I never thought that I would climb up and do it,” he continues. “I was like: It’s OK. I enjoy doing this, so I’m going to keep doing this because I love it, and let the opportunities fall as they may. But I’m going to put myself everywhere. I’m going to talk with everybody and I’m going to interact with everyone. Because I love this community—this community was so welcoming to me.”

I’m happy to share that I will be joining the RLCS this season!!

To get to say that sentence is wild for me. I am so incredibly thankful, and I can’t wait to get started. It continues to be an insane journey. I’ll see you all on Saturday!!

After a couple of seasons of working in the Rival Series and adding Collegiate Rocket League (CRL) into the mix, he casted during the RLCS Season 6 World Championship in Las Vegas—and soon got word from Psyonix that he was being promoted to the big leagues. He says he couldn’t act cool in the moment upon being told that he had achieved his dream.

“You picture the moment that you actually get called up, and you build it up to be this big, glorious moment. It was just sitting down with Psyonix, and I couldn’t help but actually cry,” says Jorby. “It felt like I had been working so hard for so long to get to a place I never thought I would go. At one point, it felt impossible to get there. And then when you’re finally told that, it’s a shock to your system. It’s like: Holy shit, are you serious? It was every bit as glorious as it had been built up in my head.”

Jorby was incredibly nervous during his first weekend on the RLCS, but the rest of the casting crew—most of which he had already worked with, whether at the World Championship or third-party tournaments—helped him rise to the challenge and ease into the role.

“It’s genuinely the greatest group of people I have ever had the pleasure of working with,” he says. “They are so passionate about not just Rocket League, but gaming. We do nothing but try to build each other up and be the best person we can be for each other and ourselves. It’s a super-positive atmosphere to be in. I couldn’t be more thankful to be part of a team like that.”

“I just wanted to give those guys a shout-out,” he adds, “because they deserve every bit of praise and they work just as hard as everybody else.”

Jorby offered a little window into how the RLCS commentators prepare for the matches. He says the casters are primarily left to their own devices to be ready to broadcast, and when he first started in the Rival Series, he prepared a massive document full of team blurbs and insights on players and stats. Now in the RLCS and doing 2-3 matches per weekend, his process is more focused on watching in-game replays from each team’s or certain players’ perspectives and trying to glean recurring tendencies to highlight.

“Rocket League is such a moment-to-moment game, so there’s not a rigid strategy that you can study, or tactics that players use that you can be like: Watch out for this. Because it really depends on how the game evolves from kickoff,” he explains. “Patterns tend to pop up in series after series. Stats come and go, game by game—some players are pretty consistent on that. But rather it’s their tendencies, like how good they are mechanically. When you look at someone like Gimmick, it’s like: Gimmick wins every single challenge ever. Why? That’s why we say things, like every time you see Gimmick behind the ball, he tends to win that challenge.”

“It’s more so just watching the games and taking notes on how players respond and how they see the game,” he adds. “We’ve really evolved our understanding of how to prep from too much reliance on statistics, at least for me, to this blend of: OK, this is what I’m seeing a tendency of and here’s some stats to back that up.”

And while casters mostly prepare individually during the week, Jorby says he sees big benefits to comparing notes with his casting partner before a broadcast to understand where they’re both coming from. In his case, often working with former pro player Isaac “Turtle” App, they’ll talk about ways into and out of conversations, what lingering questions they may have about a team or match-up, etc. “It’s so much easier to bounce ideas live off your co-commentator when you have an understanding of where their thought process is, and not just yours,” says Jorby.

In addition to tempering the intensity of his output over time, he’s also tried to hone in on what makes for beneficial play-by-play commentary. Rather than constantly narrate what viewers can see right in front of them, he’s gradually sought to tell more of the story of what’s happening on the pitch: the maneuvers, patterns, and strategies that lead to visible results.

Much like a player who rises through the ranks and has that evolution on full display for viewers—as Jorby thinks we’ll see with CRL players in the coming seasons—fans of Rocket League esports have seen Jorby’s own growth over the last couple of years. He admits that it’s difficult to gauge that kind of improvement in the moment when he’s grinding and juggling casting duties for multiple Rocket League properties, but says the change in perception and feedback towards him makes him believe he’s heading in the right direction.

“You get so caught up in the day-to-day and just trying to be better the next day, and be better the next day… you grind that wheel for long enough that you forget how long you’ve been grinding on that wheel,” says Jorby. “But when I actually take a step back and I look at the comments that are said about me now, I’m like: Wow, this really has turned around for me. I must have improved as much as I thought I have!”