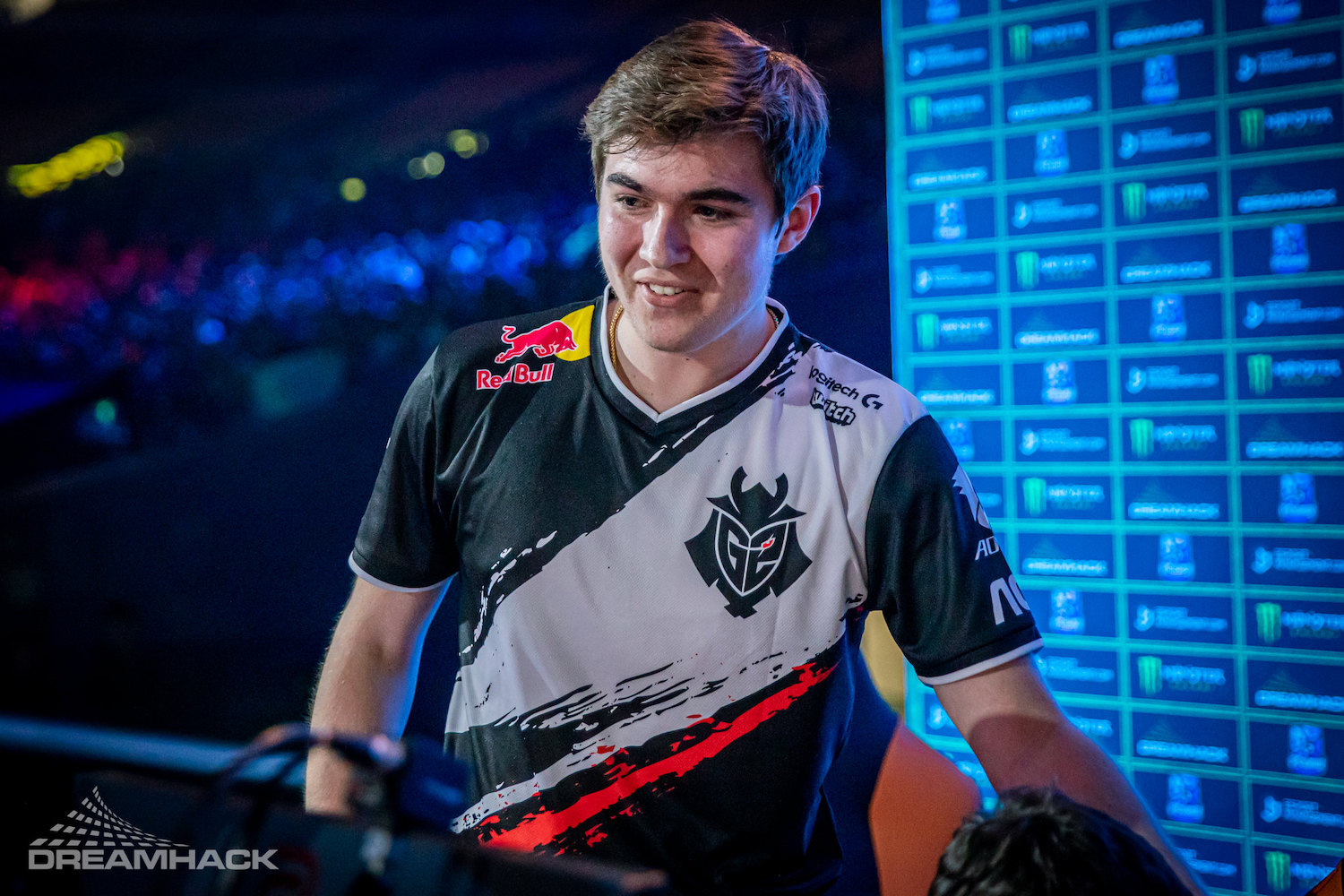 G2 Esports nearly experienced the highest of highs and lowest of lows in the Rocket League Championship Series in 2019. In Season 7, the team made it to the grand finals of June’s World Championship, establishing the roster—with newly-added Reed “Chicago” Wilen alongside Jacob “JKnaps” Knapman and Dillon “Rizzo” Rizzo—as one of the best in the game.

A few months later, the same team finished in last place in Season 8 league play, and was forced to fight for its RLCS lives in the promotion/relegation tournament. G2 came out victorious alongside the also-struggling Cloud9 (and JKnaps played like a madman that day), but the season marked a perplexing decline that seemingly came out of nowhere. Would G2 stick together, and if so, could they return to their status as a North American powerhouse?

They did stick together, and early now in Season 9, the signs are very positive. After three weeks of league play, G2 Esports sits in first place in North America as the only undefeated team. A 3-0 start is something to celebrate, no doubt, especially after last season’s unraveling. However, as JKnaps tells Rocketeers, they’re not letting this initial success lull them into complacency—something that he says helped lead to last season’s struggles.

We caught up with JKnaps this week to talk about RLCS Season 9, recovering from last season’s issues, recently moving into a G2 team house, and his thoughts on this summer’s upcoming Intel World Open.

Rocketeers: How are you feeling as a team going 3-0 to start the season?

JKnaps: We feel the exact same as we do if it was the very start of the season. We’re not feeling extra-confident. We’re confident that we got a fresh start and a good start, but it feels like the exact same: every single week is like a reset in mentality. We just take it week by week, and no matter what our record is, we try to bring the same energy that we do when it’s 0-0 at the start of the season.

What’s working differently this time around for you guys?

I think a big factor is… last season, I put a lot of blame on myself for complacency. We came off Season 7 as grand finalists, and the LAN right before league play started, we made it to the grand finals at DreamHack Montreal. I know for myself, I thought we would just be fine.

I know my hours were really low compared to a lot of other seasons. The drive wasn’t there, because I thought we were playing so well as a team right now and we didn’t need to change anything. Even in scrims, I thought we don’t have to try as hard or try to improve because we’re playing so well. I do put a lot of blame on myself for being complacent.

Beyond what your own role in that might’ve been, were there other struggles in the team, whether on the pitch or your mentality together?

I think scrims weren’t as good as we always usually have them. Since we’ve come to the team house, every scrim has been really, really good. If we’re losing even a couple of games, we try really hard to get it back.

For Season 8, we were just home and we just didn’t really care. We didn’t think scrims mattered as much, and we thought we’d just be fine because of the LAN placements. Scrims for us—if we’re winning scrims constantly day-by-day, we kind of get used to how we’re playing in those scrims and that transitions into the actual matches on gameday. If you’re not having the best scrims and then you go into gameday not knowing how to play really well, that matters a lot.

I spoke to Torment after the promotion tournament, and he said he thought Cloud9’s struggles were due in part to that motivation factor as well. But he also said the changing meta was something they struggled to keep up with. Do you feel that was the case with G2 as well?

I honestly don’t know about that. I think the bump meta has always been there, it’s just that teams will take advantage of mistakes way more often than not compared to back in the days that us, NRG, and Cloud9 were the “Big 3” for multiple seasons.

We would play kind of rough against some teams, but we would still come out winning because a lot of teams couldn’t punish on mistakes. If you make one mistake, the new teams will punish you. When you’re down a goal, they can play good-enough defense where they can win a one-goal game off of one mistake, like a kickoff goal. The new teams are definitely better at punishing mistakes.

How did you work as a team with Jahzo to correct last season’s issues?

For Cloud9—I can’t speak for them, obviously, but I think they need a talk like that to actually start getting the issues going and try to get a problem solved for that. If we’re playing bad, communication is the number-one thing.

Last season, during league play, we thought we were fine just because of those LAN placements, even after… there were two weeks in a row that we got 3-0’d by NRG and then 3-0’d by Pittsburgh Knights, and we just didn’t have a talk about it. We thought we were still fine. That’s a big problem: you have to have those talks to improve something, or nothing will change if you don’t.

Was there any discussion of roster changes in the offseason, or did you feel comfortable that you could turn things around?

We thought about it a bit, and then we actually had a team talk. We thought there were going to be DreamHacks this offseason, so before we were gonna make a roster move, we were just like, “OK, we’ll see how the offseason tournaments go. If those don’t go well, then yeah, we can make a change.” After there was no DreamHacks announced, we really just had the team house talk for a few months, so we figured we’d give that a go. And if the team house doesn’t make us play well, then we’ll make a change after the next RLCS.

How did you guys end up in a team house this season?

The main reason was because Chicago lives in California, or he did, and with Rocket League, RLCS games for North America are all played on U.S. East servers. Chicago just really wanted to move out because he’s playing all of his league play matches with 100+ ping. That was one of the main reasons.

Another one was Chicago, me, and Jahzo all just wanted to move out of our parents’ houses eventually, and we all had this idea of moving somewhere in America together, because we all wanted to move anyways. It would just make it easier, and G2 pays for it too, so it’s easy on everyone.

What has that atmosphere been like, and do you think it’s helping your performance?

Has this longer season format felt different so far—like playing three matches and only being a third of the way through the season?

Shifting gears to the Intel World Open, have you been talking to other Canadian players about a potential roster?

Yeah, I’ve been talking to Squishy. I don’t know who he would play with as a third, but I’ve also been talking to Allushin and AxB—they’re teaming up. I’m probably just gonna do tryouts with both of them and see which one I’m more comfortable with and choose from there.

How excited are you for the prospect of playing in an international tournament with your Canadian brethren?

I mean, it is really cool. Honestly, I’d rather have DreamHacks or whatever. For the exposure of Rocket League, it’s pretty cool. I don’t know how much it’s actually gonna do for exposure—I don’t know if it’s going to be broadcast with the other Olympic games or whatever.

The only thing that sucks is me, Squishy, Allushin, and AxB are all split up from our main teams for probably over three months, and that’s a lot of time that there could have been DreamHacks or something. I definitely think it’s a good thing and a bad thing at the same time.

Are you worried at all about the state of the pro scene to have such a big break in the summer?

Yeah, I’m a little bit worried, but there’s nothing really you can do. Especially if you think about it, there’s only one team from America that’s going to be going, and there’s what, 25 American players in the RLCS right now? Twenty-two of them are gonna be doing nothing for the whole offseason.

Honestly, maybe that’s good practice time, but a lot of these teams are not gonna be scrimming—because I’ll be playing with the Canadian team and probably scrimming with them, and I won’t be able to scrim with my actual team. It’s a little rough.