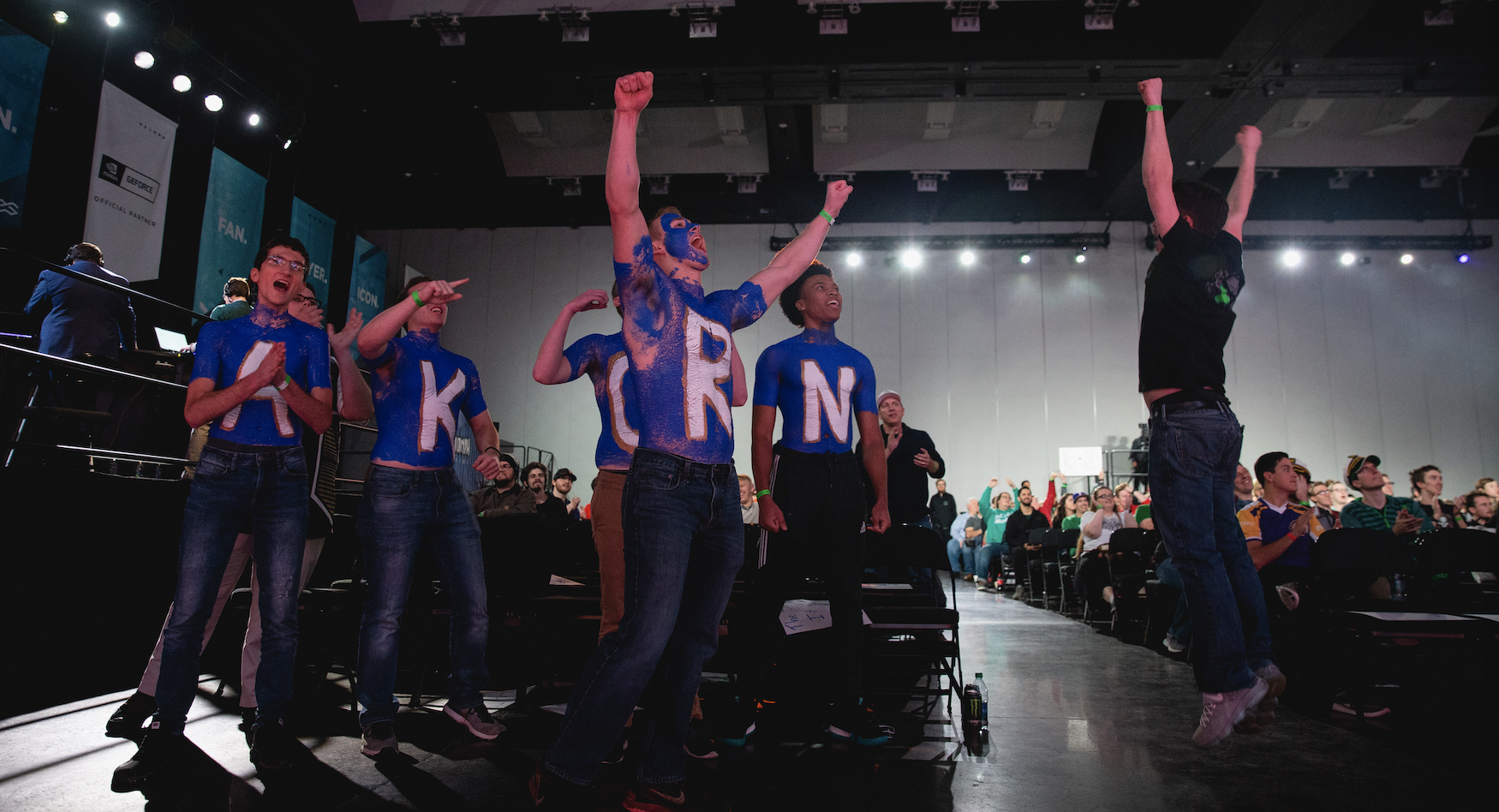 While Collegiate Rocket League (CRL) pulls tens of thousands of average viewers to its thrice-weekly broadcasts, it’s been marked by a seemingly significant portion of the game’s esports fanbase as lesser-quality Rocket League.

And from a fairly objective standpoint, those complaints have been reasonable. It’s true: the average CRL match spotlights less technical and less consistent play than you’d see from the RLCS and most Rival Series matches, and the vast majority of these players are relative unknowns in the pro space. It’s just not at the same level as the pro teams and leagues.

But the tide seems to be turning there. Highlights from this season’s CRL broadcasts have spotlighted fantastic shots, and the overall level of play has become most consistent across the league. It may not be long before we see players make a name for themselves on the collegiate stage, and go from a CRL upstart to a proper pro player.

CRL and RLCS caster Joey “Jorby” Ahrens has a deep love for the league, and he shared some of that enthusiasm during a recent interview. He also explained why he thinks people who have previously shrugged off the league should give the CRL the old college try.

From Carball to CRL

Much like with Rocket League’s professional scene, the community had already formed a collegiate scene well before Psyonix got officially involved. The community-driven College Carball Association (CCA) was founded following the 2016 AVGL Collegiate Spring Showdown in an effort to help nurture wider-spread interest in collegiate competition. Once Collegiate Rocket League was announced in fall 2017, the scene was ready to dive in.

“It goes from that community focus to OK, now Psyonix wants to make an official league,” recalls Jorby. “The support for it from the start was pretty crazy.”

Admittedly, the level of play was wildly disparate across the board. It made sense: not only were these amateur teams, but some of them didn’t have much time to assemble and improve their rosters ahead of the league start. On top of that, they’re college students first and foremost. Unlike pro players, a bit of collegiate carball action probably isn’t their top focus. But with each new season, the teams have improved.

THE DISRESPECT 😱@ZipsEsports are doing it all in Game 3. #CRL19

“Kind of out of nowhere, the next season of CRL a year later, when I joined—it got a little bit tighter. Players got better,” says Jorby. “Now the majority of the players in the league are Grand Champ or hovering around that area… I think with all 32 teams, I want to say like 95-100% of the players are all at least at the entry level point of Grand Champ. The competition keeps getting better.”

It’s really starting to show this season, with the last set of playoffs matches taking place tonight ahead of the Collegiate Rocket League National Championship 2019 on November 9 at Esports Stadium Arlington in Texas. The teams are getting smarter, and the players are getting crafty. Just a glance at the highlights shows unexpectedly brilliant shots that are a blast to watch, even if they aren’t necessarily as mechanically finessed as those from RLCS pros.

That sort of looseness shines throughout the broadcasts, too. For this season, the CRL casters—Jorby and Michael “Achieves” Williams—and host Jack “Corelli” Collier ditched the desk in favor of a cushy, dorm room-like couch setup, wearing turtlenecks and cracking jokes all the while. It’s relaxed “college vibes,” as Jorby explains.

I’d like to file a formal complaint against @AchievesTV. This is complete slander and the audacity to do this on stream is beyond me.

I want him fired by the end of the week.

That mentality also extends to the player interviews, which pop up regularly throughout the nightly Mon/Tues/Weds broadcasts. Unlike the pro players, who are often (but not always!) media trained and have organization and sponsor reputations on the line, many more of the collegiate athletes are happy to goof on rivals.

“There’s a wider breadth of personality from the players. College kids… they’re college kids, right? They’ve got a lot to say, and especially because these guys have been interacting with each other in the collegiate community already,” says Jorby. “There’s already some beef—a lot of them like to pick on each other and stuff. They’ll come onto an interview and just trash talk, because that’s what they do. We don’t get a ton of that in the pro scene. We might be starting to see a little bit more of it, but collegiate from the get-go has always been that way.”

Obviously, the college connection is also key. Collegiate football and basketball are enormously popular, and while CRL hasn’t quite hit that same level of viewership, the desire for alumni and students to root for their college team remains a strong lure. That kind of school spirit shines through at times, especially with the raucous crowd at the last CRL National Championship.

“For the Akron guys, they came to the National Championship last season, shirts off, straight-up wearing body paint to spell out ‘ZIPS GO,'” he says. “These guys come out to support their school, and I think that’s the biggest difference. The RLCS and Rival Series don’t have that. They have player personality alone; there isn’t this institutional identity attachment like a college is to a lot of students, and a lot of people who are friends and family of students.”

Another reason to watch has nothing specifically to do with the collegiate angle, but it’s a potentially compelling hook for fans of the esport. As the level of play gradually improves, we’re seeing collegiate players evolve intro potentially strong contenders who could challenge for a Rival Series spot in the near future.

By following CRL play, we could potentially see players grow from collegiate prospects into the next great pros—like in traditional sports. Think back to the rise of NRG’s Justin “Jstn” Morales, and his growth from a super-promising Rival Series upstart to a top-tier RLCS pro. Before long, if the CRL players keep advancing as they have so far, we could see that path-to-pro begin at an even earlier level than Rival Series.

THAT IS DISGUSTING 🤢@UMichRLC score with with an absolutely SICK goal. #CRL19

“You get to see the evolution of a player,” says Jorby. “I think that’s one of the most beautiful things about lower-level play, is that you get to see the growth of a team and a player—which isn’t something you really get to see a lot in RLCS. You only see players and teams at their peak and then they fall off, but there’s probably only five players who continually push the mold in RLCS and get better. In CRL, there’s tons of players that improve over time.”

Jorby points to Buzz “Buzz” Krader, a member of the University of Akron team that won the last CRL National Championship back in April. He says that Buzz was sort of a “ball-chasy, solo hero” kind of player when he first began collegiate play, but that he’s turned into a true team player—and a CRL champion in the process. “Now he passes all the time,” says Jorby. “He doesn’t really take shots much at all. He utilizes his teammates plenty. That’s the evolution of a player, and it’s pretty incredible to watch.”

University of North Texas player Dylan “dbanq” Windebank is another player who is pushing against the pro bubble, says Jorby, along with LSU’s “Tbates,” Akron’s Tristan “.Tristn” Roberts, and University of Texas at Arlington player “Adverse.” Jorby sees those players as potential Rival Series candidates that could push through to the next level with further focus and dedication.

“That’s that next step, right? I’m telling you, I don’t know if it’s going to happen next season or the season after,” he says, “but CRL players who commit to it will crack through, and I think that will bring the perceived legitimacy that I think some fans are looking for.”

Give it a shot Even if it’s not next season or the season after, Jorby suggests that RLCS fans who rarely look outside the top-tier pro league should consider following the CRL now. It may be a couple steps below the ultra-refined pro mechanics, true—but there’s something brewing there.

“There’s still this stigma that if it’s not the RLCS, then it’s not worth watching. I understand the sentiment, I really do—but looking at the Rival Series, and CRL specifically, these are fun games,” Jorby asserts. “We have our dud games in CRL like any other, and it’s hard to get excited about matches that just don’t have good gameplay. But a lot of these games have really good gameplay. They’re close games, it’s exciting, and something I would implore the Rocket League community to consider is that: give other leagues a chance.”

“Give the other official leagues a chance, and you might find yourself really surprised with how entertained you are,” he adds. “Especially CRL. I can’t shill for CRL hard enough.”

Tickets for the Collegiate Rocket League National Championship 2019 are currently on sale. The University of Akron has already qualified for the finals, with the other three teams decided tonight. Watch the stream at twitch.tv/rocketleague.