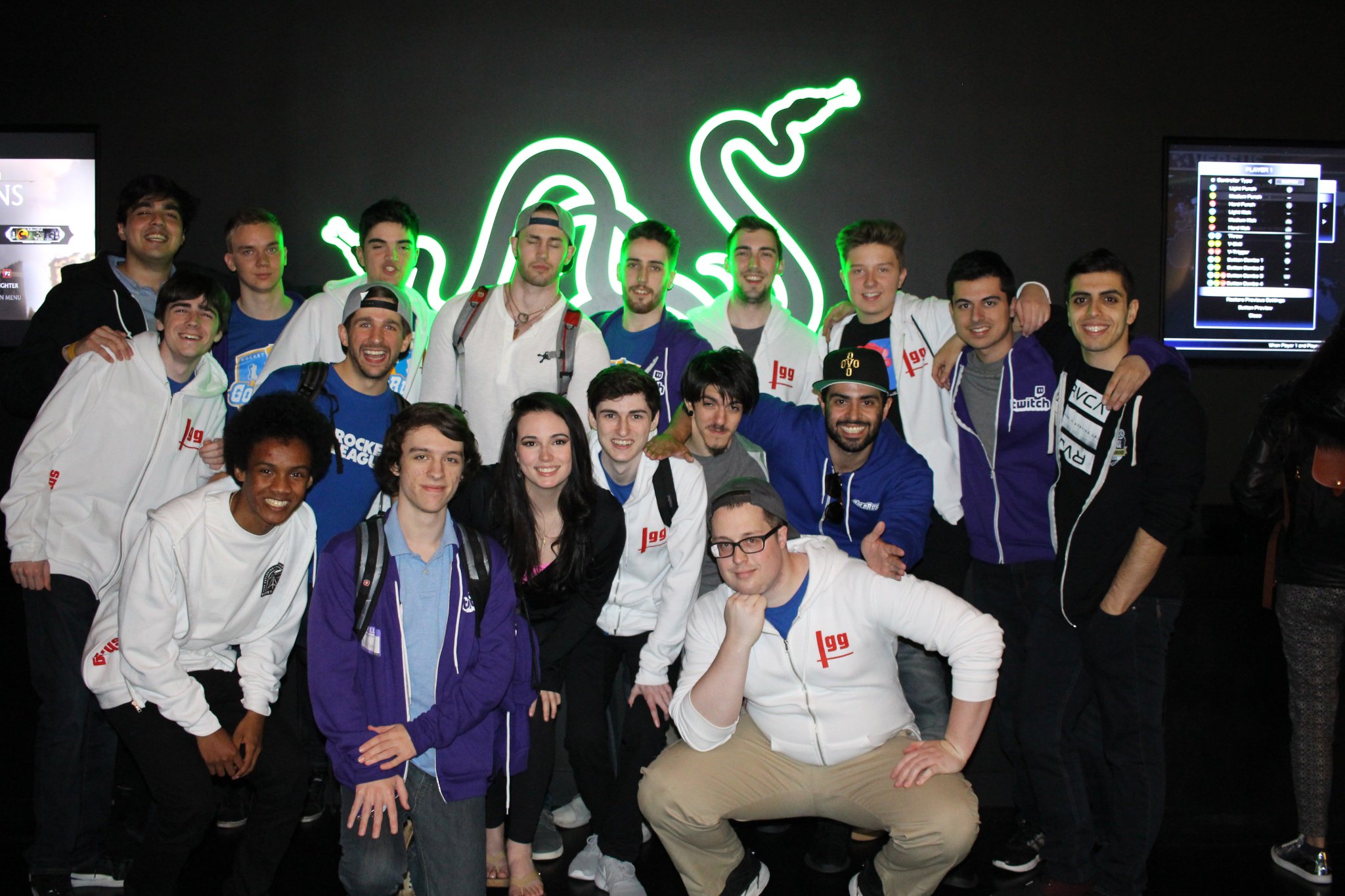 Rocket League has no shortage of high-profile live competitions, whether it’s the RLCS World Championship, ELEAGUE Cup, or DreamHack LANs. However, the tone is always serious: teams are there to win competitions, earn prize money, and represent organizations. It’s still plenty exciting and fun to watch, but we don’t get much of an inside look at what the players are really like outside of sound bites.

That’s what made last year’s Gold Rush LAN such a refreshing—and entertaining—change of pace. Funded entirely by community donations and merchandise purchases, Gold Rush flew several professional Rocket League players into the San Francisco Bay Area for a weekend of streamed shenanigans. Sure, they were still there to compete, but what made the stream so much fun was seeing the players hang out, chat, commentate, and have a good time.

Given the success of last May’s debut event, it was thankfully only a matter of time before they’d do it all over again—and this weekend, February 9-11, Gold Rush 2 promises some fresh faces and surprises following another successful crowdfunding campaign. Ahead of the action, we spoke with the Gold Rush crew about last year’s event and how they plan to top it.

The Gold Rush team was assembled by four friends, some of whom you’ll recognize from watching pro Rocket League competition. James “Jamesbot” Villar and Michael “Quinn Lobdell” Behrouzi are best known as casters and analysts for the RLCS and other events, while Jack “Corelli” Collier casts the Rival Series and Collegiate Rocket League. Pairing up with Mitchell “Furtive” Morley, who handles partnerships at Smash.gg, they considered how they might combine their talents to produce something for the scene.

“We started to talk about possibly putting our heads together to do something cool,” Corelli explains. “One night at about 2am, James and I put a spreadsheet together for a budget, a format, and a list of players. We all went for it, and Gold Rush was born.”

While all talented and well-connected, they lacked the resources to fund something like this outright, and they couldn’t ask the young pro players to fly themselves out for a fun weekend. Instead, they turned to crowdfunding via a smash.gg-powered store, selling things like t-shirts, posters, and even game controllers signed by the attending players. Along with direct donations, the profits from each sale could be put towards travel expenses for each group of players, overall expenses, or the prize pool. Rocket League fans happily bought into the idea, funding every single expense tier.

“To put it simply, it ‘FeelsGoodMan.’ But it’s also a huge relief. We can’t count how many times the question of ‘Are people really gonna support this?’ came up our first time around. We knew we had a great idea and a crew with resumes to back it up, but we really had no clue if the community would get behind it,” says Corelli. Furtive adds, “It’s something of a goodwill contract between us and the community, and it humbles me every time I think about it—knowing that this many people support our vision adds a unique layer of encouragement.”

“Seeing these players joke with each other caused an outbreak of contagious smiles,” says Furtive. “When we were doing our bonus stream from Twitch at the first one, Rizzo slapped Sizz on the cheek lightly and Sizz yelled, ‘All day boi!’ How can you not break out laughing after that?”

Corelli says the fan meet-and-greet before the weekend was a highlight, as kids brought plain white t-shirts for players to autograph; another highlight of his was flying popular streamer Joni “JHZER” Humaloja to the United States for the first time. Jamesbot’s own list of favorite moments ranges widely, and includes “Sizz elbow-dropping my bed and breaking the frame,” for example, as well as “Espeon decked out in gold in a performance for Turtle.”

“It was a bit surreal, even for the players. It was cool to see the players hang out in that tiny apartment. On stream, there was a lot of talk about Rocket League and players giving insight, but off-stream a lot of players are really friends,” says Corelli. “We hope it felt more like a vacation than a competition for the players, and we think that shined through.”

At the end of the weekend, everyone seemed thrilled with the results: the players are always happy to have time together at LAN events, so that kind of chill environment provided that without the pressure. Viewers flocked to the streams, participated in chat, and poured more money into the store for the prize pool. And the Gold Rush team, of course, pulled off the first version of what seemed like a new cornerstone event for the Rocket League community.

It won’t be the last one, either, as Gold Rush 2 starts up on Friday, February 9. Players have been arriving to the rented house—an upgrade from Jamesbot’s apartment—all week, and they’ve put on low-key early streams and posted photos from their travels. They’ll do another meet-and-greet at the Razer Store in San Francisco on Thursday before the extended three-day streaming event officially kicks off.

For the Gold Rush team, the goal was to lightly enhance what worked so well the first time around. They’ll still have a mix of 3v3, 2v2, and 1v1 competition between the invited players, but this time around, they won’t be split into regional teams. They’ll form up squads and still earn nuggets for wins, but it’ll be fun to see what kinds of pairings they concoct. Other than that, Gold Rush 2 have fewer breaks in the stream and the crew plan to pump in a bit more variety.

“We have added a new section to the stream that’s completely different from the last time, which we think people will like,” Corelli teases. “We are also hoping to add some new video content outside of just playing Rocket League.”

We’ve been through two RLCS World Championships since the last Gold Rush, along with many other major events, and the competitive landscape has shifted. Gold Rush 2’s list of invited players nods to the first event’s roster by keeping a few fan-favorites in the mix—but it also adds in several new players, including some who have made more of a mark on the pro game over the last nine months.

Crowdfunding via smash.gg was used again, but so was funding via partnerships with Red Bull and Twitch—the latter of which provided $5,000 towards the prize pool. Even with more of a corporate presence than before, the team say it’s important to ensure that the community remains the primary force behind bringing Gold Rush to life.

“The intent of Gold Rush is completely community-driven. It’s supposed to show pro players and personalities like you’ve never seen before for the fans. Having the event crowdfunded gives the community ownership—something to hold onto and say, ‘We did that,'” explains Corelli. “Even if in the future we move away from crowdfunding and fund the event entirely through awesome partnerships (like Twitch or Red Bull), we will make sure that this event is what the community wants and owns.”

While they have some surprises in the mix this time and have tweaked the format a bit, the first Gold Rush showed that the real draw for viewers is seeing the players together in a relaxed and sometimes ridiculous environment. And the organic moments that emerge on the stream, be they laughs or incredible shots, are ultimately better than anything that they could try to plan out in advance.

“This entire event is to show off the personality of the pros. We see our favorite player onstage, concentrated and focused to win at RLCS, but you don’t get to see how funny, goofy, and interesting some of these pros are,” says Corelli. “We’ve always said that we wanted to ‘humanize’ the players—this means surrounding them in an environment they feel comfortable in, and letting them just be themselves. We think that Gold Rush gives fans a chance to not only be a fan of the player, but be a fan of the person as well.”

“The beauty of Gold Rush is the monster it turns into once you turn the stream on,” he suggests. “The event has a life of its own, and anything can happen.”

Andrew Hayward
Andrew is the Lead Editor of Rocketeers, and has been covering Rocket League esports since RLCS S1 for publications such as Red Bull Esports, Esports Insider, The Esports Observer, and Waypoint. He is also currently the Content Lead for The Esports Journal magazine and has written about games, gadgets, etc. for 100+ publications since 2006.
ahaywa
Next Articles
Watch G2’s excellent Behind the Scenes Video of Dreamhack Leipzig