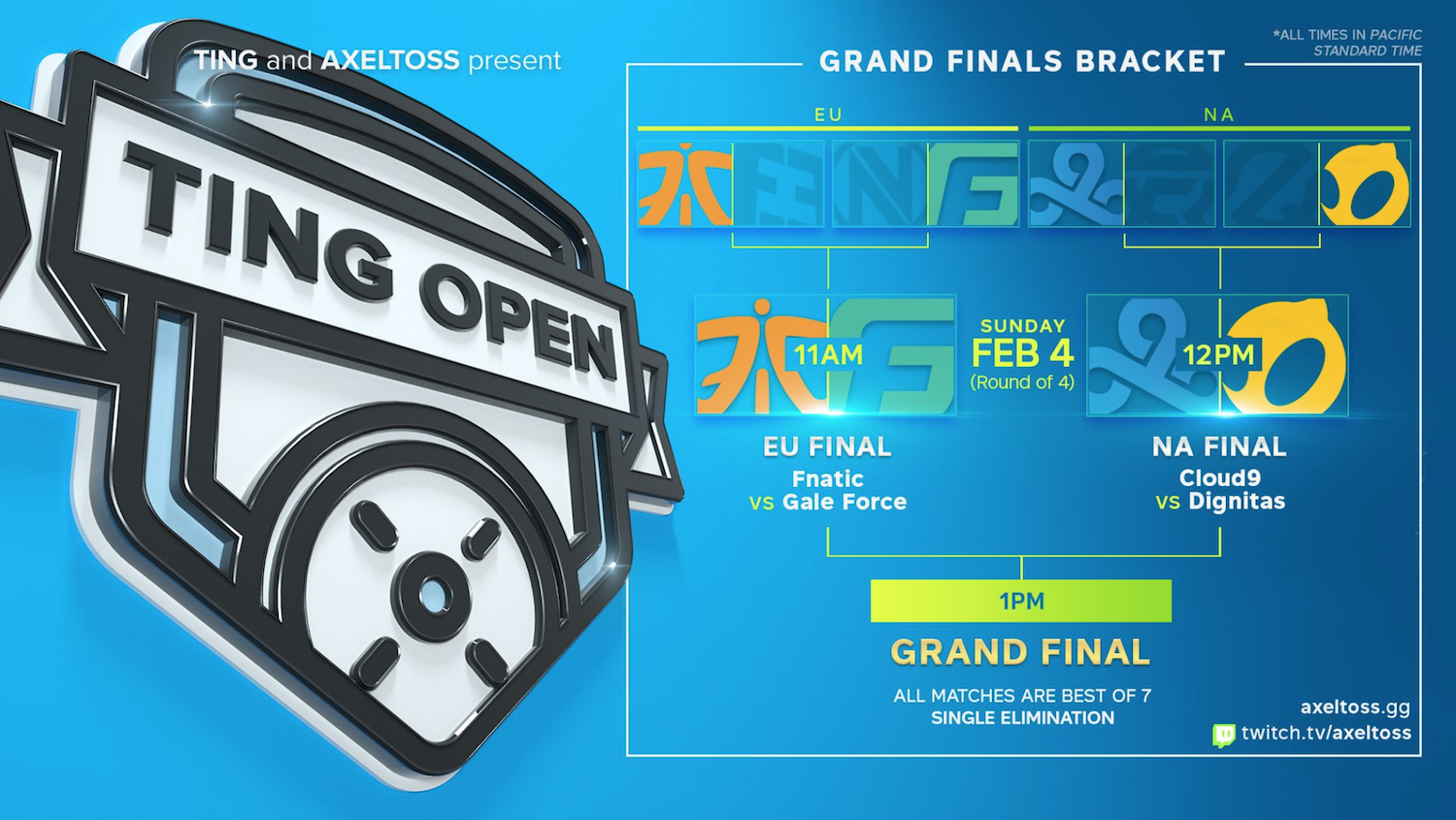 The 3 biggest takeaways from the Ting Open finals

With the RLCS roster lock just a few days away, the pro Rocket League offseason is coming to an end—and things are getting a lot more exciting. Last weekend saw Paris Saint-Germain take out G2 Esports at the thrilling DreamHack Cup finals in Leipzig, and then this weekend delivered an online slugfest between two giants in the Ting Open finals.

The Ting Open is the brainchild of U.S. carrier Ting Mobile and RLCS host Alex “Axeltoss” Rodriguez, and the last few weeks of qualifiers led up to the final battles between top European and North American teams this weekend. In the end, we got yet another match between Gale Force Esports and Cloud9—a fight we’ve seen go both ways in the past—although it wasn’t the only story this weekend. Here’s a look at the three biggest takeaways from the Ting Open finals.

1. Gale Force is dominant, as usual

The battle between Cloud9 and Gale Force went back and forth across a full seven games, but ultimately, the reigning RLCS champions took the win. Gale Force absolutely dominated in the quarterfinals and semifinals, taking out EnVyUs 4-0 in the former before smashing through Fnatic 4-0 in the latter. It wouldn’t be a weekend of clean sweeps, as mentioned, although they came out strong in the grand finals.

Beginning on North American servers, Gale Force overcame the ping disadvantage to win the first two games against Cloud9, with Alexandre “Kaydop” Courant especially productive in those early skirmishes. Cloud9 bounced back and won the next two games on European servers, and then the teams each took a game on their own regional servers before reaching game seven. Back to an EU server, Gale Force absolutely crushed Cloud9 in that final battle, winning 7-1.

A big game 7 for @GFEviolentpanda as he scores a ? HAT TRICK ? and more to complete the BRA71L and take the series over @Cloud9! GGWP to C9 on a thrilling match! #GGFE pic.twitter.com/v6OQdJbOD9

It’s hardly surprising to see Gale Force cruise to victory given their massively successful second half of 2017, although after going out in the quarterfinals of DreamHack, we didn’t know how much rust they’d still need to shake off before the RLCS season. Well, it doesn’t look like much at all.

2. Cloud9 emerges from the offseason

We didn’t get to see Cloud9 at DreamHack Leipzig: the team couldn’t make the trip due to school commitments, so Kyle “Torment” Storer subbed for 3rd/4th-place NRG while Mariano “SquishyMuffinz” Arruda and Jesus “Gimmick” Parra stayed home. We haven’t seen them in high-level competition since December’s ELEAGUE Cup, so this was their biggest showcase in a couple of months.

So how did they fare? Pretty well, overall. Rivals Series team FlyQuest (ex-Ambition Esports) gave them a bit of a scare on Saturday, but Cloud9 came through with the 4-3 victory. Dignitas, another Rival Series team (ex-Fibeon) that looked great at DreamHack, then had a big opportunity to make their mark against Cloud9—but Cloud9 took the 4-0 semifinals sweep. Against Gale Force, Cloud9 didn’t look their best, with a limp offensive showing at times and lacking rotations and synergy. Luckily, however, they kept things interesting and managed to take the grand finals series to game seven.

Surely they’ll be fine going into the RLCS season, although North America looks a lot more competitive this time around. In the last two months, G2 won ELEAGUE and nearly took DreamHack as well, making them at least a co-leader in the region for now, while NRG’s addition of Justin “Jstn” Morales makes them a potentially more dynamic threat after a down season.

Will this be the last time we see the EnVyUs trio of captain Remco “Remkoe” den Boer, David “Deevo” Morrow, and Marius “gReazymeister” Ranheim together? If so, they went out with a whimper instead of a bang: EnVy fell 4-0 to eventual winners Gale Force, and it certainly wasn’t the first time they’d been dominated by the reigning RLCS champions.

EnVy is also a team of RLCS champions, of course: Remkoe and Deevo won together in season three, while gReazymeister won back in season two with FlipSid3 Tactics. Unfortunately, this team has struggled significantly since gReazy took over for Nicolai “Maestro” Bang (now with Fnatic) last summer. They nearly bounced out of the RLCS with a 1-6 season, and then couldn’t make it out of the group stage at DreamHack Leipzig.

The captain tweeted that he’d “be addressing things,” and while that’s no promise of a roster change, we have to wonder if it’ll mean the exit of either Deevo or gReazy. All three are incredibly accomplished players on their own, but for some reason, this pairing hasn’t paid off as competitors have only gotten stronger and stronger. We can’t imagine that a major organization like Team EnVy is going to sit back and watch them struggle for another full season ahead.

Andrew Hayward
Andrew is the Lead Editor of Rocketeers, and has been covering Rocket League esports since RLCS S1 for publications such as Red Bull Esports, Esports Insider, The Esports Observer, and Waypoint. He is also currently the Content Lead for The Esports Journal magazine and has written about games, gadgets, etc. for 100+ publications since 2006.
ahaywa
Next Articles
The Best Goal You’ll See All Week – Just Insane!
Inside The Rocket Dailies, Twitter’s best Rocket League account
Axeltoss: “Ting Open will be the better Super Bowl”