Dillon “Rizzo” Rizzo has emerged as one of the faces of pro Rocket League, not only due to his place on the immensely popular G2 Esports, but also his widely-viewed Twitch streams and videos. He has cultivated a die-hard fan base along the way, and they show their appreciation in sometimes curious ways—like calling him “daddy.” And making t-shirts of it, no less.

G2 had a rough run this weekend at the RLCS World Championship in London, falling first to compLexity before dropping a tight five-game series to Evil Geniuses to bounce out on day two—despite Rizzo’s own early-series heroics against EG.

Earlier that day, however, we had a chance to speak with Rizzo about trying to bounce back from defeat, finding his place on the pitch with teammates Cameron “Kronovi” Bills and Jacob “JKnaps” Knapman, and what he thinks about that whole “daddy” thing.

Can you talk a bit about trying to contend with compLexity’s unique style on day one?

Well, compLexity was a team that we’ve never played before, I don’t think, in any tournament. We also scrimmed them once, like six months ago. It’s always a new challenge to face a team you’ve never played before. I mean, in general, you’re not really sure what to expect or what they can do. When we were watching them play Tainted Minds, we didn’t think they looked that strong, but we all know what happened after that.

Did you guys specifically prepare for them before Worlds?

When you find yourselves down like this, how do you keep from spiraling and carrying that frustration into your next series?

When you lose a series, it’s kind of hard to just go into the next one. But it’s definitely good to have a day off and go into the next day with a different head. You get some sleep and start over—it’s a new day. Just act like you didn’t lose. [laughs]

JKnaps said that you guys put in a lot of work to get comfortable with each other and find your roles. How did that help you?

If we go all the way back to season three, where we had the blunder and we didn’t qualify for LAN with the five straight losses or whatever… me personally, I was hesitating a lot because I didn’t know what the other two were doing. After we worked for months trying to figure out what we should be doing on the pitch, I feel like I found my place and my “position,” as much as I hate using the word for Rocket League. Yeah, just figuring out where I should be and what I should be doing just to help out the other two. 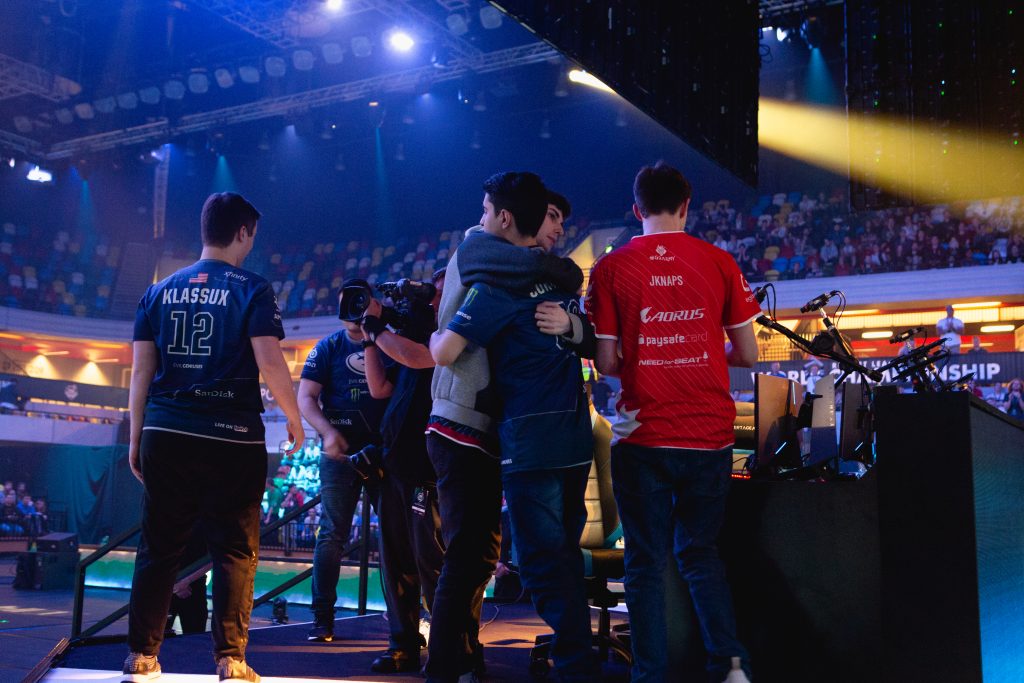 And how does that come out in the game—what is your “position?”

What has been your favorite part of the London experience so far?

Well, we went around town with some people from the G2 org—the content team, the videographer and photographer. They were really cool. We met them last time [in DreamHack Leipzig], as well, but getting to see them again was really fun. They took us around. It kind of sucked that we didn’t get to see Big Ben, but it’s under construction. Unlucky.

How does it feel to see yourself on a “Rizzo is dad” t-shirt?

I mean, it’s funny—it really is pretty funny. I didn’t expect to see that. It’s unexpected, so I guess I’m kind of speechless with it. But it’s all in good fun. It makes me happy in a weird way.

Does any of that ever cross the line and make you uncomfortable at all?

Well, I’ve never been 100% with people calling me “daddy.” [laughs] But it’s not gonna stop, so it’s just gonna happen and I have to get used to it.