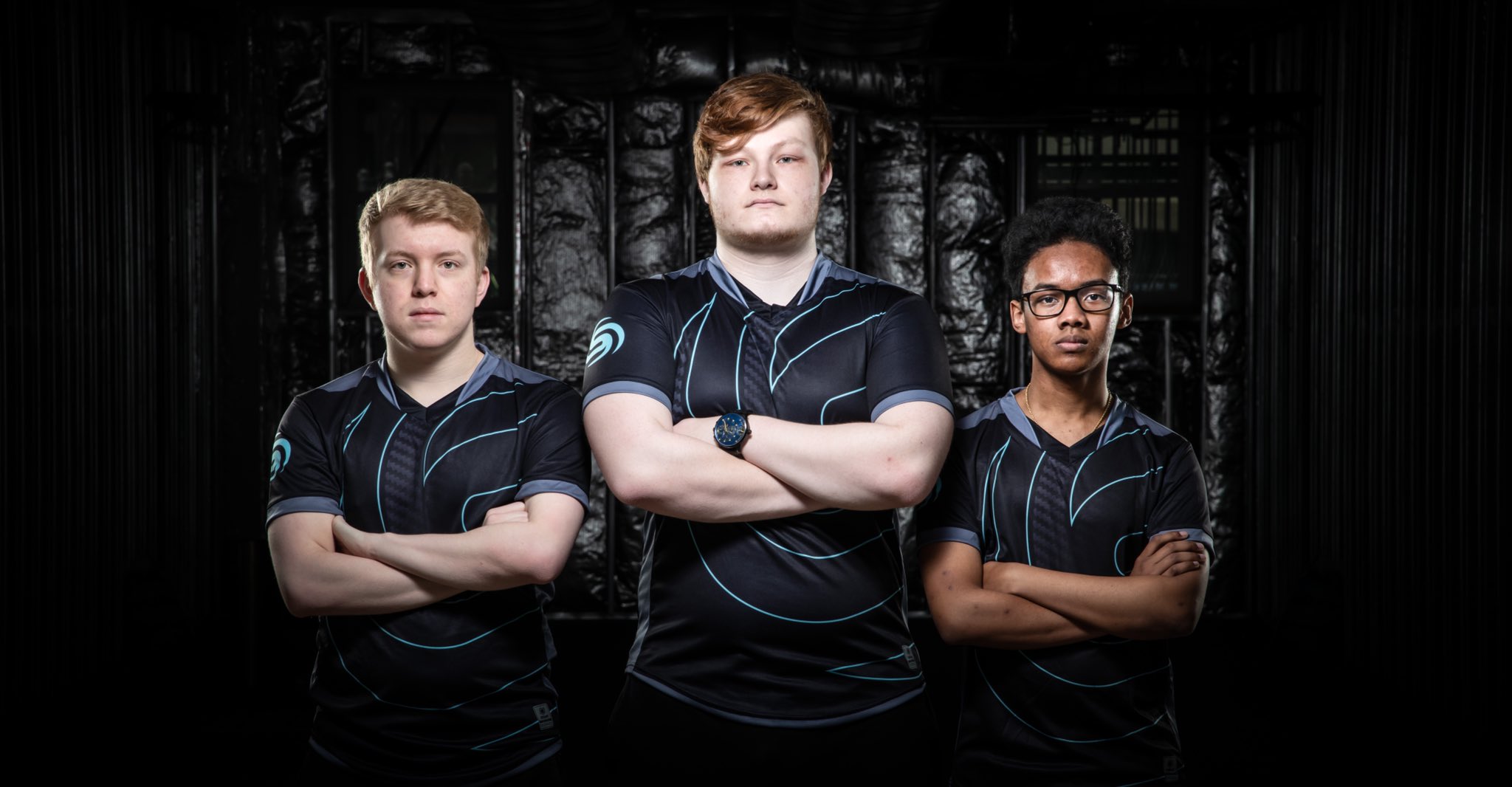 Wait, who? While Rocket League fans might have anticipated an established Tier 1 esports organization or maybe the RLCS-eyeing Golden Guardians, Afterthought opted for a smaller, newer organization with two q’s in its name and a home base in Harrisburg, Pennsylvania.

As players Chris “Dappur” Mendoza and Matthew “Satthew” Ackermann explained to Rocketeers last night following the announcement, they were in demand as a new team joining the RLCS for Season 9—but the Soniqs won them over with a strong offer, the opportunity to live and train together, and a very keen interest in the team.

“They reached out to us, and right off the bat they exceeded the offers of other Tier 1 orgs,” says Dappur. “We were really intrigued because we had never heard of them, but they were in Rainbow Six Siege and in the highest league, which is essentially the same thing as RLCS. We looked into them and had some meetings with them. We asked a ton of questions, and they responded to us really fast compared to another org that we won’t name. They offered to fly us out to see the facilities, apartments—all that stuff. They were very adamant about getting us to be a part of them.”

We have officially entered @RLEsports. ?
Please welcome our official roster for the #RLCS9 season:

Asked if there’s any downside to signing with an organization on the rise rather than one that’s already widely-known, Satthew says, “Potentially from the individual side of things, when we’re talking about brands and stuff. Obviously, if we were to sign with a huge org, we’d get their brand exposure as well. But in terms of resources, Soniqs really have everything we need.”

Dappur, who has experience with organizations large and small including Selfless Gaming, Renegades, and Counter Logic Gaming between RLCS Seasons 3-5, suggests that the trade-off of potentially sacrificing that immediate brand boost is the increased focus and attention from a smaller organization. They feel like a priority with the Susquehanna Soniqs.

“It honestly really depends on the team,” says Dappur. “If they care more about that exposure and that boost to their own brand, or if they really just care about how hands-on the org is with things and how [that] could be better than Tier 1 orgs where it’s so big that it seems more corporate… sometimes you can be ignored because there’s so much that they have going on.”

As suggested in the amusing announcement video, the team—including Nathan “Shock” Frommelt and manager Lucas “MitsEvoX” Frommelt—has moved in together in Pennsylvania, with a seperate training facility for practice. According to Dappur, not living in and training from the same space makes it easier to focus on practice when it’s time to work.

“It’s really nice. Compared to having a team house and playing from your room but inside a house, we have apartments and then a facility,” he says. “We separate work and home life, so if anything, it makes us more productive. Being at home, we don’t focus on Rocket League at all—just do whatever you want to relax. When we’re here at the facility, it’s all Rocket League. It’s really made me personally a lot more productive, I know.”

And with the Soniqs’ entrance into the North American RLCS creating the unexpected situation of two Pennsylvania-centric teams in the league, the opportunity is ripe for a rivalry with the Pittsburgh Knights. “We’ve never really had that in Rocket League,” says Satthew. “I already see people on Reddit urging it to happen, and I’m for it too. I’d love a little rivalry.”

Back to the RLCS

Season 9 sees both Dappur and Satthew returning to the RLCS after a span outside of the top-tier league. As mentioned, Dappur competed in Seasons 3-5 and was a popular player in the scene, making it to the Season 3 World Championship with Selfless Gaming. The following season, his roster with Renegades had to fight for its RLCS future in the promotion/relegation tournament—and came out alive. In Season 5, however, his CLG squad fell short at the same task and was relegated to the Rival Series.

Asked if he expected to compete again at the highest level, Dappur responds, “Yeah, definitely. It’s just a lot of things didn’t go my way… I thought we were playing RLRS when me and Mijo got relegated, but days before roster lock, he just said he was going to sub. I was stuck with essentially no team and no options, so I subbed that season.”

Seriously in tears, its been so long. Love this team, Afterthought in RLCS Season 9 ?

He says he’s tried out with RLCS and Rival Series teams in the meantime, but the opportunities didn’t work out. It wasn’t until he joined Afterthought for last season’s Rival Series that he finally found the competitive combination that would lead him back to the RLCS. There’s been a lot of excitement about seeing Dappur in the big leagues again… but also what he noted are people trashing him on Reddit. In any case, he’s appreciative of the former. “I’m glad there’s still some people who, after almost a year and a half, still support me,” says Dappur.

In Satthew’s case, this is his second time fighting his way through the Rival Series to claim an RLCS spot. His Bread squad won the promotion tournament during Season 6 and played in RLCS Season 7 under Spacestation Gaming… but after the season, he was dropped from the roster. Satthew admits that he considered hanging up his controller and calling it a career, but that the motivation from his new teammates helped persuade him to keep going.

“Getting removed from SSG was really depressing from one standpoint, and it was difficult as well because not only had I lost my salary—actually an increased salary because we had just gained it from retaining our spot—but also any sort of security in the scene,” he says. “I was a full-time student at the time, so I was actually really drawn to just going full-time as a student and not even bothering with Rocket League anymore.”

“There’s obviously a bit of resolve, because I had to play with my team and play well for us to make RLCS, but a lot of that resolve also came from encouragement from Dappur and Shock,” adds Satthew. “They pushed me really hard and encouraged me that I should play with them, and that it’s worthwhile pursuing this again, because they were really confident in what our team could do.”

Thankful for another chance

Satthew was unceremoniously dumped by Spacestation after a Top 4 regular season finish, but it only took one season in the Rival Series to find himself back in action in the RLCS with a new squad. Clinching his return with Afterthought proved that he still deserves to be in the RLCS.

“I hadn’t expected to make it back so quickly,” says Satthew. “With the time before, we had a Sypical on our team, who is one of the best players to ever touch the game. But then as our [new] team unfolded, I saw that Dappur and Shock have incredible amounts of skill, and it wasn’t until late in the season I saw that we could actually make RLCS again. Just making it was unbelievable and such a great feeling.”

Shock is the newcomer of the trio, but his more experienced teammates don’t act like they carried their comrade into the league. If anything, they say, it’s the opposite.

“Me and Satthew both agreed that Shock is easily the best player; he’s an insanely consistent shooter. The whole season, I was playing a supportive role to make sure everything was flowing properly and that Shock could do what he wants,” says Dappur. “I think it was inevitable for Shock to be in the RLCS at one point or another.”

Nothing better than turning a dream into a reality. Can’t believe we made it. Thankful for @Dappur @SatthewRL

Satthew suggests that their synergy as a trio has contributed to their success to date, including winning last season’s Rival Series playoffs, and that now living and working together in person with the Soniqs has only helped empower that connection.

“We’re all on the same page on how we should approach play,” says Satthew. “Following scrims, especially after we’re not doing so well, we look over our mistakes. We’re extremely honest with each other. It’s also really nice being in-house, because we’re able to look at these mistakes in real time. There’s no beating around the bush since we’re all here. We’re all just very understanding of how we should play and how we should get better as a team, how we can remain consistent, and how we should approach taking on other teams. I think it’s that cohesion that makes us such a good team.”

Granted, they won’t be starting off the eight-week RLCS season easily: they have undoubtedly the toughest matchup of opening weekend by facing current RLCS champions NRG Esports right off the bat. Still, they’re confident that they can contend at this level, and think they have a shot at upsetting the champs this weekend.

“There really isn’t any pressure on us,” says Dappur of the NRG matchup. “Everyone is expecting us to lose it, but I think we have a really good chance to come out strong and even possibly take the win. I think a lot of people might be surprised—if we play our game—by how good we actually are.”

“We’ve been putting in a lot of work behind the scenes,” adds Satthew, “and just working really hard and making sure our play style is right, and that we’ll come out really confident.”