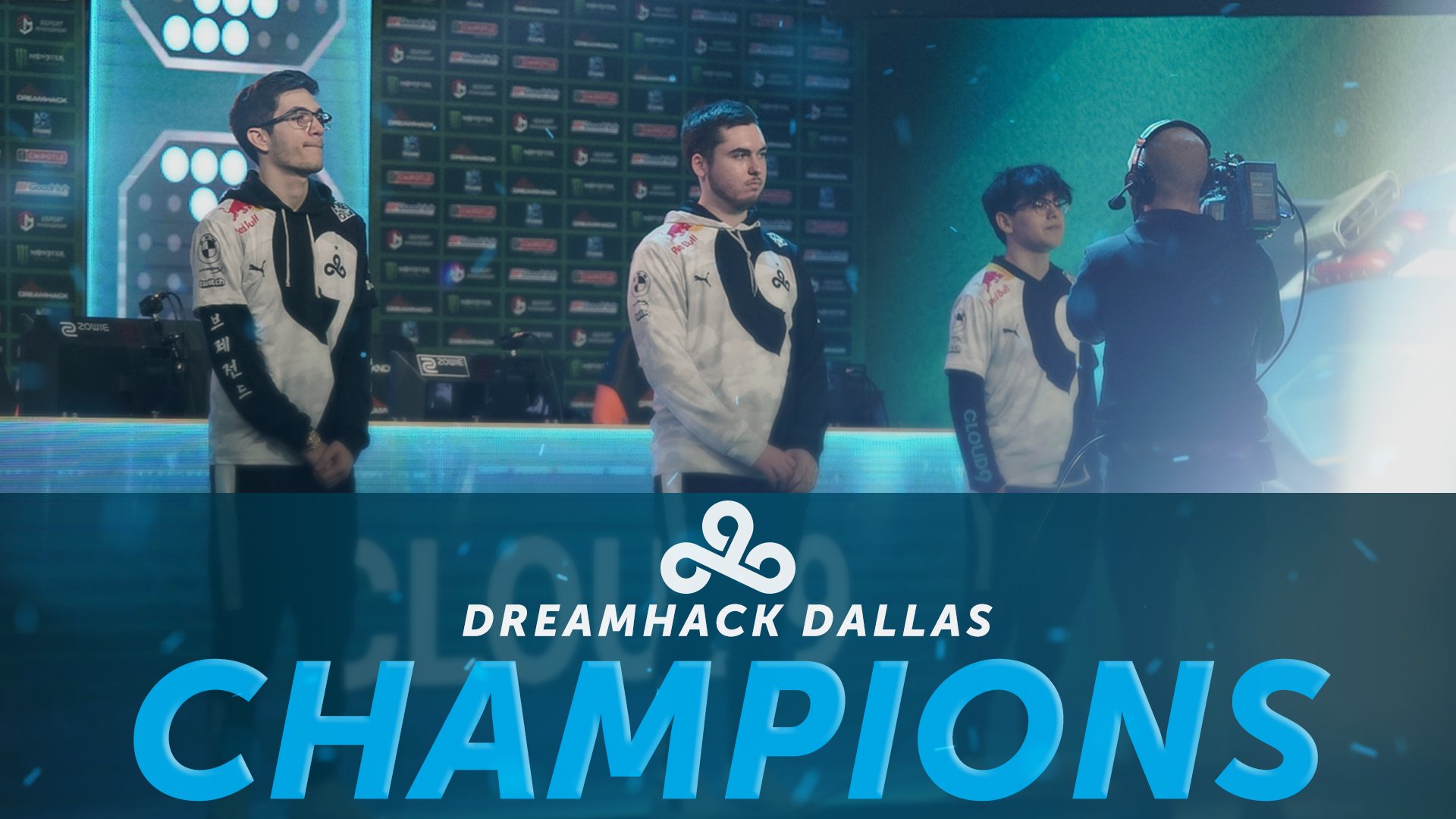 This past weekend, 32 teams battled at Dreamhack Dallas, and without dropping a series, Cloud9 pulled out a win. With 14 RLCS teams from Europe, North America, and Oceania, the competition was stiff which led to many upsets over the weekend. This was also the last LAN before the RLCS Season 7 finals, and gave a more in depth look at how most teams play, and how they stack up against each other.

.@DreamHackRL #DHProCircuit #DHDAL19 kicks off in 1 hour with Day 1 of the Group Stage between 32 teams! 16 will advance,

A and B Stream: https://t.co/JIXEmUXGZK

The first day of Dreamhack brackets seem like they would have the least amount of upsets, but there is always room for top teams to fall or lower teams to shine. One big story line was Mouz, who has been relegated to RLRS, playing with Speed as a temporary stand-in for the tournament. He brought his magic from WSOE: 4 and on day 1 helped Mouz beat Vitality in a close game 5. In this same group, Spacestation Gaming had an early exit when they fell to the European team Method. In group B, there were no obvious upsets, with Dignitas beating Renegades, and Evil Geniuses beating Splyce twice to move to day 2.

In group C, two of the promoted RLCS teams, The Peeps and Complexity showed that they deserved their new spots with close games against FC Barcelona and G2 respectively. Both underdogs fell, but made it through to day 2. This seemed like the closest group, and held promising teams that all had “pop-off” potential. Group D also played out as expected, but had RLRS team RBG Esports showing potential with two game 5’s against ICON and Rogue.

With half the field gone in the @DreamHackRL #DHProCircuit #DHDAL19 – 16 teams remain for Day 2, and it's looking spicy! ?️

Below are the groups for tomorrow's chaos:

The second day of competition is where any weaker teams were weeded out, and only includes top teams. Subsequently, this day is normally the craziest. In group A, any team seemed able to advance, but the upper bracket came out as seeded. Dignitas took a close game 5 win against Mouz to stop a reverse sweep, and gained their day 3 spot. The Peeps played a close 5 game series against Cloud9, but Cloud9 pulled out the win, and then pulled out another game 5 overtime win against G2. Dignitas and Cloud9 were through to day 3.

HOW IS THAT EVEN POSSIBLE?!? ?@Torment with an insane shot to tie up the game. #DHProCircuit

In the lower bracket, Rogue beat The Peeps and ended their hopeful run. Rogue were then stopped by Mouseports who, with the aid of Speed, came from not top 8 in Europe to top 8 in the world. The biggest upset of this group happened when Evil Geniuses decided to not give up on their day 3 hopes. Down two games to G2, EG fired back with two wins. In the game 5, EG knocked out the third place North American team to get through to the day 3.

This is just SICK ?@TigreeeRL hits the shot and @mousesports are on to Day 3. #DHProCircuit

Group B turned into an insanely stacked group with the upset of Vitality, and had a first round matchup between NRG and Vitality, the top team from NA and EU. With a close match expected, NRG did not care and swept Vitality. They seemed like the clear favorites now, so obviously they would lose their next series against TSM. Even with two wins to threaten the reverse sweep, TSM stopped all momentum and handed NRG their first series loss, and first game losses. On the other side, FC Barcelona swept their way to day three beating ICON and Complexity.

In the lower bracket Vitality kept their hopes alive with a sweep over Oceanic champions Renegades. They were then faced with Complexity, and ended up on the wrong side of a perfect sweep. Complexity did not drop a game, or goal against the European champions. On the other side, ICON swept PSG to have a shot at day 3, but they were tasked with facing NRG. NRG rallied back after their loss, and made their way to day 3 with a close 3-1 win.

The Playoff Bracket for the Top 8 is set as tomorrow is Championship Sunday! $100,000 in total on the line along with the Top 4 going to Valencia!

To start off Championship Sunday, the timeless rematch from the RLCS Season 5 finals began the day as NRG went against Dignitas. This ended up being the closest sweep as Dignitas won three overtimes in a row to beat the North American champions. NRG had looked like the best team in the world when sweeping Vitality, but fell on day 3 due to Dignitas stepping up and apparent health troubles. The next series had Cloud9 going against Complexity. With each game separated by only one goal, Cloud9 advanced to the semi finals to repeat the last RLCS finals.

The Quarterfinals are live right now. Don't miss it! #DHProCircuit

The next quarter final was probably the closest series of the day. Mousesports, with their farthest LAN showing, had gotten to day 3 and were against TSM. Mouz started out well and won the first two games. Then, in a game 3 overtime, TSM scraped out a win. They carried this momentum into the next game, and forced a game 5. With a reverse sweep looming, Mouz played their hearts out, and kept the score even for most of the game. Unfortunately, Speed, the substitute who had helped them get so far, made a mistake and lost a goal in the last minute. They could not recover and fell out with a top 8 finish.

.@Metsanauris with an insane shot off the ceiling!

The final quarter delivered a surprising result. Evil Geniuses took on FC Barcelona, with FCB as the heavy favorites. Evil Geniuses did not care and against all odds took a convincing 3-1 win to secure a spot in Valencia with a top 4 finish guaranteed. Cloud9 then took on Dignitas to get a shot at the trophy. This ended up being a convincing 4 to 1 win for Cloud9, who got their shot at winning their second Dreamhack. In the other semi-final, Evil Geniuses’ run ended in, again, a 4-1 win for TSM, to secure a rematch of the ELEAGUE 2 finals.

THAT IS ABSOLUTELY NUTS ?@YukeoRL hits a crazy shot to get @dignitas within one. #DHProCircuit

In the finals, Cloud9 started in control, and took the first two wins without letting a goal in. TSM fired back with two wins of their own to tie up the series. Cloud9 fought back and returned to their winning ways as they took the next game. In game 6, Cloud9 quickly got a two goal lead, and were poised to win the event. They managed to score a third goal with one second left, and walked away victorious. They had won the most recent tournament with RLCS coming up, and had won their 5th international LAN title.