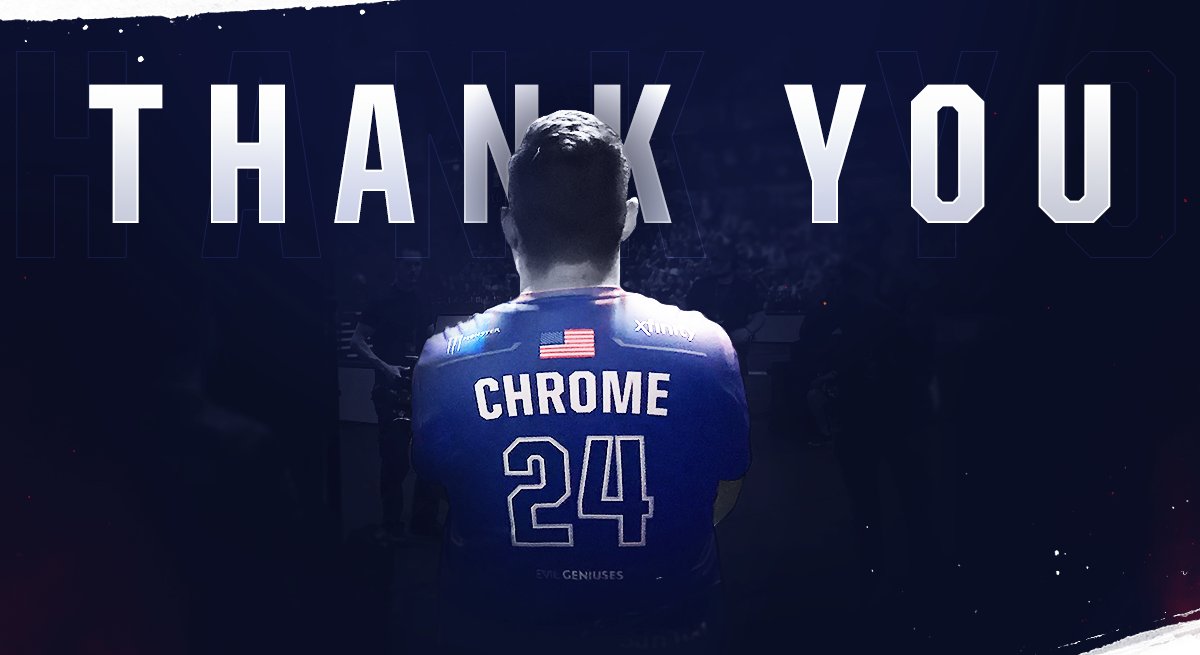 Roster shuffles are in full swing as this week concludes. Fnatic, Vitality, Rogue – and now Evil Geniuses have decided to replace players. The latest case comes as bit of a surprise: Evil Geniuses remove Robert “Chrome” Gomez from their active Rocket League roster after EG’s inaugural RLCS. The organization, most famous for its successful Dota 2 team, announced the roster update in a Facebook post yesterday.

RLCS Season 5 was Evil Geniuses’ first season with a professional Rocket League squad, and they did fairly well. Their League Play seemed a bit shaky at times, but they finished on 4th place and managed to secure a spot at the World Championship where they eliminated Renault Vitality and G2 before falling to World Champions Team Dignitas. Now their journey continues without their most charismatic player.

Chrome wouldn’t be Chrome if he’d just let this one slide. Apparently, there’s been bad blood between some of the team members for a while. Chrome took his anger about the team’s decision to Twitter in classic Chrome fashion. In his rant, which you can see below, he thanks the people at Evil Geniuses, but accuses his now former teammates of lying to his face and calls them a “disgrace to the scene”.

It’s absolutely disgusting being lied to your face by people you consider friends. Sorry for the tweet, but needed to be said. Have a great day everyone.

Would like to thank @EvilGeniuses for believing in me and allowing me to represent them this past RLCS Season. It was an honor to be apart of something so great. Great organization with great people behind it.

As in reference though to my tweet the other day. I have no sympathy for my previous teammates and coach as they lied to my face. Also when a teammate brags about dropping me before LAN and during LAN after we beat G2 to secure Day 3. As well as brag that this will be my cont.

last LAN. You’re a disgrace to the scene.

Chrome is a hero and a villain

You can think of Chrome whatever you want. He’s a notorious trash talker, and unlike most Rocket League players he polarizes. But he’s someone the professional Rocket League community desperately needs. We need heroes and villains in esports, and Chrome is exactly that, either a hero or a villain depending on the angle from which you look.

For example: Going into the World Championship, one of the most intriguing storylines was ‘Chrome vs. OCE’. With a couple of Tweets and some banter here and there, Chrome managed to upset the entire OCE community. EG’s first match in London was against OCE’s Chiefs Esports and it would’ve been a rather boring match if it wouldn’t have been for that fantastic feud between Chrome and the OCE players that added another dimension to an otherwise standard match. It became a showdown between two rivals, and we as viewers were curious to see how the storyline unfolds. (Spoiler alert: OCE’s Chiefs won 3-2.)

Troubles reach back to the weeks before LAN

There’s no doubt that Chrome’s experience and skill played a major role in EG’s World Championship qualification. But apparently the troubles within the team reach back even further to the weeks before the LAN in London. Chrome mentions that his teammates didn’t want to practice with him before the World Championshop which already made him suspicious.

This suspicion has now become reality. The exact nature of the troubles within the team are still unknown. CorruptedG commented on Reddit “Always more than one side to a story folks”, and most of the details will probably stay buried. We just hope that Chrome will be back with another team, not only but also because of the entertainment factor he brings to the table.

In a tweet he sent our after his rant, he promises to come back with another team. For now he remains a restricted free agent and is still under contract to Evil Geniuses while exploring his next options.

I will not be done and will continue my search for a team. I will be back

His replacement in Evil Geniuses will be Chicago who formerly played for Team Dignitas.

A big welcome to @Chicago_RL to our Rocket League lineup! He joins @CorruptedGabe and @Klassux in a new trio for the next RLCS season.

What do you think about the latest roster changes? Join our Discord server and discuss all the latest Rocket League news with other fans.

Lead Image: This picture was posted by the social channels of Evil Geniuses as a farewell to Chrome / Credit: Evil Geniuses